Link to this page: https://www.socialistparty.org.uk/articles/20612 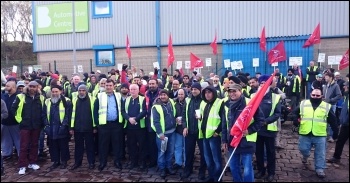 Over 300 bus drivers, engineers and support staff in Bradford said 'enough is enough' and came out on a 48-hour strike on Monday 27 April that will have a massive impact on their privatised company.

On the picket line there were stories of brutal management tactics and bullying. Whatever the right-wing press say, this action is not just about a pay rise. One driver on the picket line said: 'I was assaulted at work and the company would not even call the police, they were more interested in whether I could continue the journey to meet standards'!

He continued: 'We have to stick together' and commented further that some years ago there were 500 employees, now this has been reduced to less that 400 with the same amount of work. 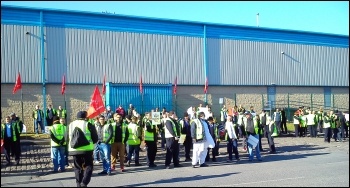 Also the bus stock is very old with some of the buses now reaching the 15 year cut off and beyond, again, raising serious health and safety issues for drivers and the public alike. First West Yorkshire stand accused of allowing services to 'wither on the vine'. As far as the workers are concerned, the depot is being allowed to run down with the intention of closing it in a city that already has way above the national average unemployment and poverty.

Rosters have been changed without any meaningful consultation, causing anger amongst workers that barely see their families as it is. So it is not difficult to see why this action has been taken. As well as giving our support to the struggle of these workers, Socialist Party members received a fantastic response to the TUSC leaflets we gave out. One worker finished his comments with: We will not go away, this is our future and our children's!