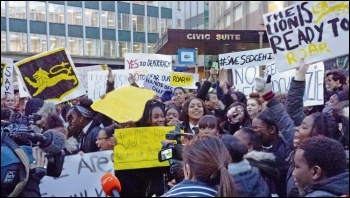 Successive governments have used the academies programme to fragment and divide education in England as part of a wider agenda to cut and privatise public services. Lewisham had largely resisted academisation, with only a handful of schools having converted so far.

However, last November, Lewisham NUT decided we had to act on rumours that several secondary schools could be under threat. If these became academies, there was a real danger that others could quickly follow

We said "don't wait until it's too late"! The NUT seized the initiative, calling a "No more academies" public meeting to explain why academisation would prove disastrous for parents, staff and students alike.

We set the tone that the academy steamroller could be stopped. We invited a speaker from Hove Park school, where a joint campaign by staff and parents had just successfully opposed academy conversion in Brighton. We were fighting to win in Lewisham too.

That meeting set up a joint 'Stop Academies in Lewisham' campaign uniting staff, parents and students. We produced a leaflet naming five schools that we understood were at threat. Now, after seven months of campaigning, none of those schools has been able to convert!

Our priority was to use our collective strength and organise strike action. At first, the campaign was mainly trade union based although a follow-up meeting quickly brought more parents and students on board too.

What better way to publicise the academy threat than to take strike action? As a parent explained: "Governors keep you in the dark, but when the unions strike, then we find out what's really happening."

We approached the NUT nationally to seek support for a strike ballot. The NUT's National Action Officers were supportive, seeing the threat of a change in employer to an academy trust as constituting a legal trade dispute. Until and unless that threat was lifted, we would take action to oppose it.

A first indicative NUT ballot across all five schools recorded a 98% 'yes' vote on a 73% turnout. This was followed by the legal ballot needed to call ongoing 'discontinuous' strikes. Four days of strike action were called in total, with school unions NASUWT and GMB joining the action too.

The campaign had an early success when governors at the first school to publicly consider academisation, Bonus Pastor, withdrew their plans. Sedgehill school then became the centre of attention.

We knew school students will mobilise to defend their education too. Determined to oppose threats that Lewisham's Labour council might turn their school into an academy, hundreds of Sedgehill students protested outside the town hall. For now, Sedgehill is also still a maintained school!

A delegation of students from the Prendergast Federation, three other schools where governors were considering academisation, joined Sedgehill students that evening and then played a key part in the campaign to 'Save Prendergast'.

They demanded that governors heard their concerns about staff turnover and worse education if the schools converted.

Actions included 'work-to-rules' in class, walkouts and their own student ballot which showed overwhelming opposition to the academy plans.

On strike days, strikers were encouraged to leaflet and build events to spread the message and were joined by students and parents too.

A packed public debate between me and the Federation's Executive Headteacher showed how little community support there was for the academy plans and how unconvincing were their arguments.

That pressure must have worried the governors. However, the blow that finally forced them to retreat came from a legal challenge.

Parents found that the Department for Education and governors had ignored a regulation requiring a federated school to win the backing of parents and staff governors too. They hadn't and so, for now, the Prendergast plans have been withdrawn too.

This challenge must have been in Tory Education Secretary Nicky Morgan's mind when she announced that she was closing 'loopholes' blocking academy conversions.

In reality, opportunities for parents' objections to be heard have already been extremely limited. Even Thatcher thought parents should be balloted over schools' 'opting-out' in the 1990s, but this Tory government wants to legislate to try and rule out any opposition.

The government may change the law but, as our battles showed, they cannot stop the opposition. If campaigns put the arguments firmly, then the academy programme's real aims are easily exposed.

However, the kind of firm strike action and bold campaigning seen in Lewisham will be needed to give that opposition real strength. The Trade Unionist and Socialist Coalition's (TUSC) election campaign in Lewisham, which backed our fight against academisation, showed the way.

TUSC activists played an important role in building community support. Academies' opponents will need to build a political voice, representatives that call for the academy programme to be reversed, unlike the Labour Party!

Academies, started by Labour, are state-funded schools but run by trusts accountable only to the government, rather than local communities.

They control their own pupil admissions and exclusions policies and don't have to follow national pay and conditions for staff.

Fragmentation and privatisation worsen public services instead of improving them.

The Tories want to force through the academy conversion of another 1,000 schools. Unless these plans are resisted they will result in chains of academies, run in the interests of their sponsoring businesses, totally replacing locally accountable maintained schools.