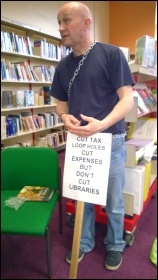 150 people, a dalek, a crocodile and Mickey and Minnie Mouse protested on 13 June against cuts to the Library of Birmingham.

It will mean a reduction in opening hours from 73 a week to 40 and possibly the loss of up to 100 jobs.

The library, which has been open less than two years and cost £188 million, is seen as a cultural icon.

Visitors from Sydney and South Africa have expressed astonishment that Europe's largest public library, which houses unique archives, doesn't open until 11am. Reduced opening hours have already caused huge queues and disruption to those using its services.

Library cuts are a deliberate choice by the Tory government. However, the Labour cabinet member responsible for libraries submitted a lengthy statement saying that the cuts were made 'with a heavy heart'.

He claimed they were forced on the council by government spending limits and that they had to prioritise between frontline and non-essential services.

Birmingham council's own consultation about the library's future produced an overwhelming no to any cuts.

Thousands of working class people use the library like the unemployed to access job opportunities, the vulnerable to seek out details of support groups and even in the computer age large numbers of students and children still use them to study.

Speakers at the rally included Alan Gibbons, author and member of the National Libraries campaign, the library Unison steward, students who have been sitting in past closing time every Friday and Birmingham's Young Poet Laureate, who lambasted the Labour council for carrying out Tory cuts.

The council is also considering a ban on amplified open air speeches in the city centre, it's an obvious attempt to undermine demonstrations.