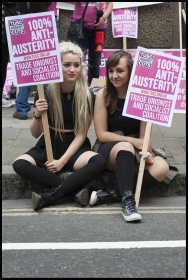 Under Cameron's previous Con-Dem coalition government, young people bore much of the brunt of Tory inflicted austerity. But Tories such as chancellor George Osborne are not content with tripling tuition fees or closing down youth services and facilities.

The axe will most likely fall on housing benefit and in-work benefits. Young people will certainly feel this as many rely on in-work benefits to top up poverty wages. It's a way to (just about) scrape by.

Backed by only 24% of the electorate, the Tories have no mandate for inflicting more austerity on the poorest and most vulnerable.

Remember that hundreds of billions of pounds were spent bailing out the banks while £120 billion is lost every year in avoided, evaded and uncollected taxes.

If we are to beat back this austerity we must keep pressure on the government by maintaining the momentum built since May's election.

The 20 June demonstration in London showed the anger at continuing Tory austerity, with a huge turnout from young people who have simply had enough.

Youth Fight Austerity has called a day of action on 8 July in defiance of the proposed cutbacks. Across the country there will be meetings, rallies, stalls and demonstrations to show that young people will not take these attacks lying down.

We will be building our campaign for a £10 an hour minimum wage, and demanding rent caps rather than benefit caps.

We will be leafletting workplaces, asking young workers to join us in expressing their anger and building a movement which can guarantee a future for us.

By linking action on the streets with workers taking strike action, we can develop a force to defeat austerity.

Take a look at youthfightforjobs.com for details of budget day protests on 8 July in your area. If you can't see a protest taking place near you, why not organise one yourself?