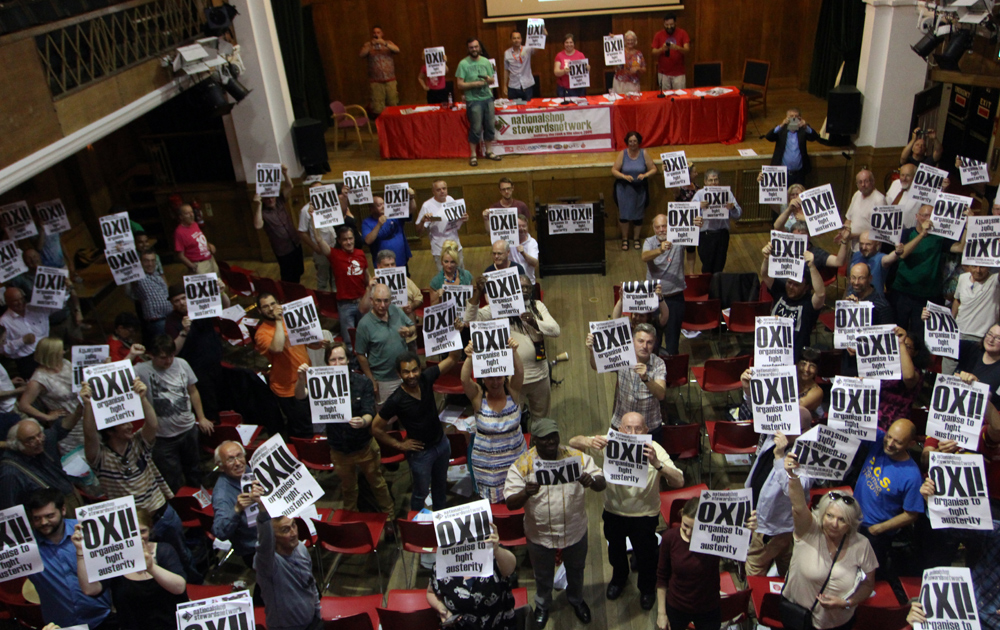 “We could stop austerity in its tracks” 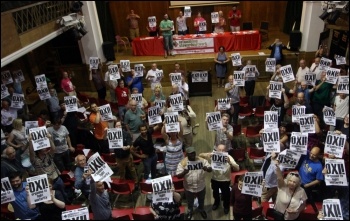 As the standing ovation for sacked Greek Vodafone worker, Harris Sedaris, died away, the audience at the ninth annual National Shop Stewards Network (NSSN) conference broke into an impromptu rendition of traditional socialist song ‘the Internationale’. It was a fitting end to a day full of hope and confidence – one that laid the foundations for the next few months of crucial struggle.

This was the first NSSN conference since the Tories’ shock election victory and no delegate was in any doubt as to the challenges we face. But they also recognised there is no time for mourning.

The morning session – Stop the Tory Union-Busters – was addressed by five union general secretaries or presidents, as well as leading activists from the floor. The common thread between almost all speakers was that the left trade unions – those affiliated to the NSSN – have to make the running in the coming months.

Matt Wrack, general secretary of firefighters’ union FBU (the NSSN’s newest affiliate), said: “Imagine if the TUC leaders began to go out city by city and town by town making the case against austerity and the case for organising and then called for a general strike – then I think that could receive a huge echo.”

Civil servants union PCS general secretary Mark Serwotka paid tribute to the NSSN for being first on the scene whenever there is a dispute. The NSSN’s ability to mobilise was echoed by other speakers involved in disputes. Candy Udwin, sacked PCS National Gallery activist thanked the NSSN for its consistant support.

Mark was adamant “we could stop austerity in its tracks” if the TUC united against our class enemies. It was a message echoed by the bakers’ union’s Ronnie Draper, the RMT’s Peter Pinkney and the prison officers’ Steve Gillan. Ronnie went back to the tremendous Hovis dispute in 2013 that achieved victory supported by the NSSN and others.

Conference gave a rousing welcome to Marie and Christine from the Glasgow homelessness workers’ dispute who reported on the Labour city council’s attempts to organise a scab workforce to break their 15 week dispute. They brought news of the success of the Dundee hospital porters’ strike, and the determination it had given them: “We’re not going back until we get what we came out for.”

The author of ‘Blacklisted – The Secret War between Big Business and Union Activists’, Dave Smith, was well received by conference as he was able to give a very serious subject the attention it deserved while making everyone laugh. 18 copies of the book were sold during the day.

The loudest response of the morning was reserved for the RMT’s Jared Wood, speaking from the floor on the London Underground strikes planned for 8 and 9 July – a historic dispute with all four tube unions involved in closing down the complete network.

There are also other strikes (for example in Bromley council and the National Gallery) being coordinated on 8 July – the day Osborne announces his latest austerity budget – showing what could be possible if the TUC grasped the historic role it should be playing.

The NSSN has demonstrated for a number of years that it is a key component in the workers’ movement. It has supporters who hold key positions in many unions and who consistently call for support for all workers’ struggles and for coordinated action.

This conference saw the NSSN beginning to take the next steps – putting itself centre stage and taking the movement forward whether or not the official bodies fail to respond. 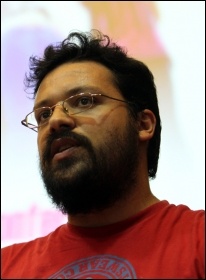 On the looming referendum (speaking the day before it took place), Harris paraphrased the famous opening of the Communist Manifesto, saying “A spectre is haunting Europe, the spectre of ‘No’! OXI!”

He addressed the Troika, saying: “We are not just unwilling to pay back the debt, we want paying for the debt! They are not your banks, they are our banks, and we should take them back under workers’ control, that is to say, we should take our lives into our own hands.”

But the campaign for a ‘no’ vote must be drawn along clearly socialist lines, of opposition to austerity and control of the rich, for true internationalism of the European working class.