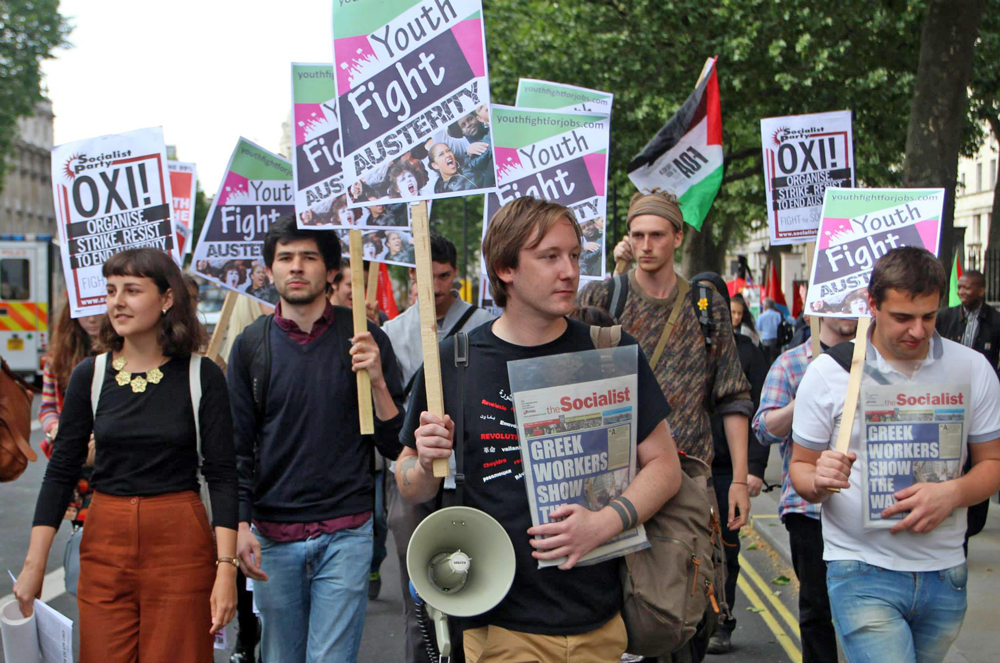 The budget saw vicious attacks on huge sections of society. But one group particularly hard hit was young people. The abolition of student grants, attacks on our right to housing benefit and that under-25s will be excluded from the new so-called living wage, mean young people are facing an even more bleak and uncertain future. But Osborne’s cuts budget was met with resistance. Protests took place around the country. Youth Fight for Jobs organised over 20 of these under the banner Youth Fight Austerity (YFA), in a national day of action on 8 July. From Syntagma to Parliament Square a cry of ‘oxi’ – no to austerity and misery, is ringing through the streets. And this is only the beginning.

Photo by Senan   (Click to enlarge: opens in new window)

See below and www.youthfightforjobs.com for more reports and photographs.

Birmingham Youth Fight for Jobs held an anti-austerity demonstration on budget day. The well attended evening protest grew to over 300 after a feeder march from Birmingham Against the Cuts joined in. The crowd had lots of energy and there were numerous speakers of different ages, some being new to the experience.

YFA’s lively stalls and their demands of a £10 an hour minimum wage, rebuilding public services and a 24-hour general strike were extremely popular. A short but vibrant rally included speakers from the RMT, CWU and Unison as well as YFA and campaigners against cuts to local library services.

Overall, with a youthful and fresh feeling, the protest has added to the range of demonstrations held in Birmingham and has received much positive feedback from people. Over 100 signed up to be involved in YFJ’s future anti austerity campaigns who had never participated in political activity before.

Protests were also held in Wolverhampton and 100 attended an early evening protest in Coventry.

As part of Youth Fight Austerity’s national action we voiced our anger at Osborne’s planned cuts outside Downing Street. As Socialist Party member Mary Finch made clear, the scrapping of the maintenance grant and its replacement with a loan is not only another attack on students who already struggle to survive, but an attack on young working class people who now face an even higher level of debt if they get to university.

Youth Fight Austerity then marched on Parliament Square to join with other anti-austerity protesters, blocking the road and making lots of noise. While some despaired at the ‘death’ of the public sector, we made it clear that an organised, united fightback is needed.

On 11 July Youth Fight for Jobs took our tents and placards to Parliament Square in London to protest at what is a government declaration of war on young people. The occupation recieved publicity in both the Daily Mirror and the Observer newspapers. The budget is an attempt to snatch our future and the grim outlook of increasing hardship for young people stands in stark contrast with Osborne’s treatment of the rich.

We erected tents to highlight the devastating effects of housing benefit cuts on vulnerable young people. This was followed by speeches and a discussion of how to take the fight forward.

Around 50 people gathered for a protest called by TUSC and Youth Fight for Jobs in Huddersfield at lunchtime. The protest heard from local trade union speakers and campaign groups including Iain Dalton on behalf of Youth Fight for Jobs. Especially noticeable was the number of people stopping to listen to the speeches on their lunch break. The vast majority of these were young people including young workers and one group of six college students. Most went away with a copy of the Socialist and left their details to find out more about Youth Fight for Jobs and the Socialist Party.

Nuneaton Youth Fight Austerity demo was a great success. We had lots of conversations with people who were disgusted with the Tories’ austerity attacks. They signed our petitions and took away TUSC leaflets about building the anti-austerity movement. Also, people were keen to get more information about the Socialist Party and our ideas.

Nearly 100 people came out and voiced their anger at the spectacularly divisive budget that will see those with least, suffer the most.

Alongside a People’s Assembly march and TUSC stall we had a Youth Fight Austerity stall. It was run by young members who are disproportionatley more affected by the official age discrimination in pay, benefits and further attacks on the right of education that this government is delighted to enforce.

A poignant speech from a schoolgirl expressed the indignation at the news that grants for students from low-income households will be totally removed and replaced by loans. The pots and pans of the crowd rang out, conviction for further action was strengthened and future students were made aware of Socialist Students.

Budget day brought together anti-cuts campaigners under the banner of Youth Fight Austerity to protest at the Bargate before marching through town to join a protest organised by the People’s Assembly (PA).

Campaigners to save Woodside Lodge care home and the Bitterne Walk-In NHS service joined with young workers and trade unionists organised by YFA. Our banners, leaflets and megaphone attracted many people, some stayed to join the protest. Others we had never met before came with their own placards and stories to tell. After half an hour we marched through town, a small but lively and noisy protest and getting plenty of support.

As we arrived at the PA protest chanting, “We can stop the cuts!” we were applauded by all those there. Many people agree that opposition to these cuts must grow, many are new to protests and politics.

25 turned up to protest against the budget in Worcester, including Youth Fight Austerity, TUSC, Worcester TUC, and members of the newly formed Unite Community branch. I was interviewed for BBC Hereford and Worcester radio as were others. Lots of people looked at our placards and banners, some signed petitions, and I had many worthwhile conversations with people in the space of an hour.