Link to this page: https://www.socialistparty.org.uk/articles/21545 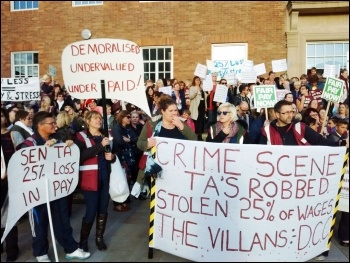 The noise outside Derby's Council House was deafening as 400 furious school support staff chanted "No ifs, No buts, No more pay cuts!" and "The school staff united will never be divided!"

They were there to let the council's cabinet meeting know how they felt about their pay being slashed by 25%, or more in many cases, following a council review. This is being done in the name of equalising pay and conditions, yet the big majority on the receiving end of the cuts are women and low paid. The workers will also lose payment for the school holidays. 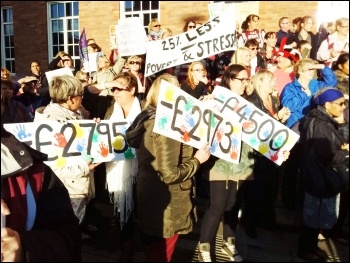 David, an inner city Teaching Assistant, said: "Derby City Council called it an equal pay review but it doesn't feel like one. At the moment I work a 40 hour week; I have been offered a 32 hour week on a lower rate of pay. I would lose about £4,000 a year. When you are on low wages anyway it means struggling to pay bills or the mortgage. We feel we have been lied to by the council.

"We do our jobs because we love education and want to help the children we work with go on to have a decent life. But we are being denied this ourselves." 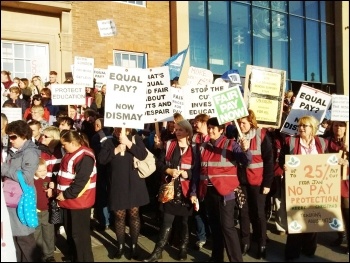 Most there were members of Unison. But the protest was organised via Facebook and word of mouth. David said: "It has disappointed me that this hasn't been organised by the union. And it surprised me that, apart from Unison, the other unions have already accepted the pay offer."

Council leader Ranjit Banwait was eventually pushed into coming out to address the workers. However his patronising comments like "I'm proud of you" and "We are on your side" did not go down well. His comments then went on to make it clear that the review was really about the need to make cuts, not about equal pay at all.

He hinted there may be some concessions and will be meeting Unison to discuss it. However if these are not enough the union should be prepared to take industrial action. Ranjit left to the sound of booing. 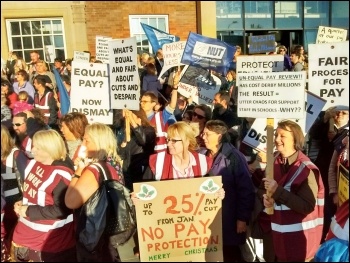 If Ranjit Banwait, who claimed to support Jeremy Corbyn in the Labour leadership campaign, was prepared to fight the government's cuts instead of passing them on to his low-paid workers then he would have them supporting him instead of angrily condemning him.

Members of the Trade Unionist and Socialist Coalition (TUSC) were at the protest with leaflets, and have been supporting the campaign. We are writing to every Labour councillor to ask them to oppose all cuts. If they don't, then TUSC will stand against them. That idea went down well with many of the workers.

This version of this article was first posted on the Socialist Party website on 9 October 2015 and may vary slightly from the version subsequently printed in The Socialist.