Support for socialism on doctors' demo 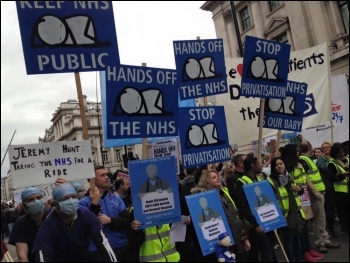 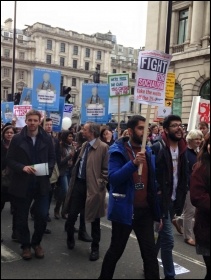 London's mainly young march was angry and determined - but also lively and optimistic about taking on the government. Doctors' union the British Medical Association (BMA) called the demo.

Thousands more wanted to be there. Blue placards throughout the march bore the names of doctors who were working at the time of the demonstration. Hunt's claim that the NHS is not a "24/7" service was proven false.

Hunt's so-called reforms would see junior doctors' normal hours extended from Monday to Friday 7am to 7pm - to Monday to Saturday 7am to 10pm. There will be no extra money for unsocial hours. It effectively amounts to a 30% pay cut. 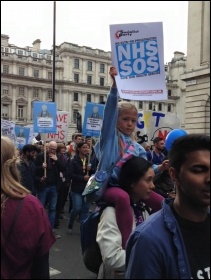 Loud cheers went up for every speaker at the rally who called for defence of the NHS. Thousands on the march chanted "Hunt must go", "NHS! NHS!" - and "BMA! BMA!" The BMA, traditionally a very conservative body, is now seen as an organisation that will fight for the NHS and its workers.

It is clear from the reactions Socialist Party members got on the demo that the tide is turning against the Tories. 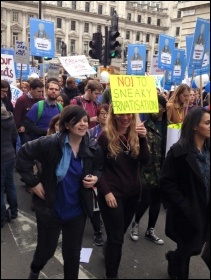 There was also support for socialist ideas.

Socialist Party leaflets were snatched up by crowds looking for a strategy to defend the NHS and beat back the tide of austerity.

One junior doctor turned to his friends after taking our leaflet and said: "I voted Conservative in May, and now I'm a socialist!"

The BMA is now balloting for strike action. This would be the first time doctors have walked out since 1975. 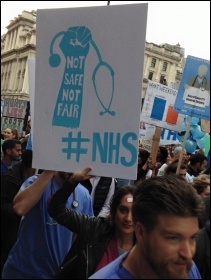 There is a huge mood among them for a fight. One doctor commented: "I don't know one junior doctor that doesn't want to go on strike"!

The decision to call a ballot has been supported by a 50,000-strong petition including doctors and the public. Doctors must now be prepared to take that action and see it through until they win.

The attacks on junior doctors are a part of a much bigger attack on the NHS. It is vital that all the unions representing health workers co-ordinate action. A wider call for solidarity from the rest of the trade union movement would win huge support.

This is a hated government with a majority of just 12 seats in parliament. In spite of their recent triumphalism after winning May's election, they are weak. A 24-hour general strike could stop them in their tracks - and kick-start the kind of movement we need to consign them to history. 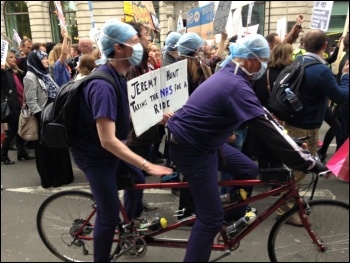 "I don't know one junior doctor who doesn't want to strike. Many doctors remember the four-hour strikes called by health workers' unions over pay last year, and thought they were a farce. I think most feel a strike should last at least a week." 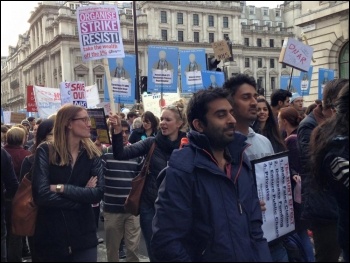 "I was a medical student in 1975 - the last time junior doctors went on strike. The BMA and senior doctors then were mostly concerned about defending their right to carry out private practice. Many of its leaders had campaigned against the NHS before it was set up in 1948. At times I felt overwhelmed with emotion. Thousands of young doctors cheering every speaker who called for the defence of the NHS, chanting "NHS! NHS!" and "BMA! BMA!" What a massive change!"