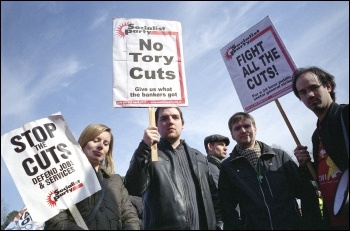 Around the country campaigns are underway to establish networks that can work together to defend the anti-austerity politics that made Jeremy Corbyn so popular in his stand in the Labour leadership election.

Socialist Party members are enthusiastically taking part in such initiatives - since the election we have highlighted the need to bring together those inside and outside the Labour Party to support Corbyn in his battle against the Blairite right wing of the party. Here are just three local reports.

The fight for Jeremy Corbyn's anti-austerity ideas has made an exciting start in Lambeth, south London.

Socialist Party members joined around 40 from across Lambeth and neighbouring Southwark at the founding of the local 'Momentum' group.

Ordinary people - including many new to politics - came looking for a movement, broader than Labour, to fight back.

Some were long-standing members of Labour or other left groups. Others joined Labour in the wave of enthusiasm after Corbyn's election, but were concerned by the right-wing roadblocks he faces.

Still others were members of no group. They supported Corbyn's ideas, but were sceptical of Labour - especially in Lambeth, home to an entrenched Blairite council.

The group voted overwhelmingly to join with Momentum nationally. This should give it access to thousands of interested local names.

Our political ideas enthused many there, especially the newer faces.

We spoke about the importance of supporting Corbyn's anti-austerity battle by ousting the 'red Tories' attacking him from within Labour. This includes writing to councillors and MPs and asking them to commit to fighting austerity.

If they won't, we can support Corbyn by campaigning to deselect them. If that doesn't work, we can support him by fielding anti-austerity candidates against them from outside Labour.

Ted Knight, former leader of Lambeth council, was warmly welcomed by the room. Ted fought austerity under Thatcher by refusing to set a cuts budget.

This was at the same time as the struggle of Liverpool City Council. Liverpool was led by supporters of Militant, now the Socialist Party, and won millions back from the Tories.

One or two members of small political groups tried to sideline us for raising the idea of standing in elections against pro-austerity Labour representatives. But this did not match the mood of most of the room - both inside and outside Labour. Newer people in particular spoke strongly in favour of an anti-austerity movement wider than just the Labour Party.

In August, around 1,500 people attended a rally and overflow meeting in Sheffield to hear Jeremy Corbyn speak during his Labour leadership campaign. Interviewed at that time, Jeremy said that "Labour councils should band together against the Tory government cuts."

So Sheffield Trade Unionist and Socialist Coalition (TUSC) has individually emailed all 59 Sheffield Labour councillors asking if they support Jeremy's anti-cuts stance and inviting them to meet with us "to discuss the possibilities of joint action against austerity, based on our council joining with others to present no cuts budgets at the budget-making meetings in early 2016."

TUSC also wrote to 'Sheffield4Corbyn' asking if they would like to co-host with TUSC a conference to draw up a 'no-cuts, people's budget' that "we can counterpose to the continuing Tory cuts being administered in Sheffield. We want to invite trade unions, anti-cuts groups, community organisations and tenants' organisations to make representations as to what should be included in such a budget, as well as working out how that could be funded and campaigned for."

Sheffield4Corbyn, who are now Sheffield Momentum, allowed TUSC to address their meeting on 12 October. While not officially supporting the 'no cuts' conference proposal because of wanting to prioritise their own Momentum launch rally, most Corbyn supporters were friendly and many said they would attend as individuals.

TUSC will continue to work with Momentum supporters and others in Sheffield and South Yorkshire in building the biggest possible anti-austerity movement around a clear no cuts policy.

Waltham Forest Socialist Party is busy helping to build for the first public event of new campaign group Waltham Forest for Corbyn. The event is designed to reach out to the thousands of people in the east London borough who have been enthused by the election of Jeremy Corbyn and his anti-austerity stand in the Labour leadership election.

After an opening platform explaining the aim of the group - to unite those inside and outside the Labour Party who support Corbyn - the meeting will break into workshops. Two Socialist Party members have volunteered to run workshops - one on resisting the housing crisis and one on disability.

Socialist Party members will take part in all of the workshops, which will discuss how local people are affected by different issues and what they would like to see done about it. We have raised the idea that the points discussed could be pulled together to form the basis of a people's budget for Waltham Forest which could be a campaign tool for the group and be used to lobby councillors with.

Separately, Waltham Forest TUSC has written to our three local Corbyn-supporting councillors asking to meet with them to discuss working together against cuts. At a recent lobby of the council cabinet organised by the trades council, some councillors said they were open to this idea. It seems that Corbyn's victory may be giving confidence to some Labour representatives who have previously been cowed into voting for cuts.

We also leafleted a Labour Party new members meeting with copies of the letter we have sent to councillors. People were friendly and keen to discuss the strategy needed to secure a party that can implement the great policies that Corbyn has popularised.

A discussion is ongoing about whether this group will become the Waltham Forest branch of Momentum. The last organising meeting agreed to encourage the national organisers of Momentum to adopt democratic structures that allow local groups a say in its politics and strategy.