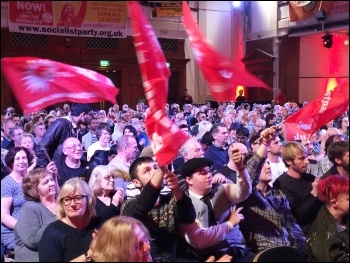 I have been a socialist ever since the day in 1984, when nine years old, I recall my father swearing about Maggie Thatcher during news coverage of the miners' strike. When I saw his reaction, I realised I was witnessing an important struggle, one full of pain and injustice, and I instantly knew what side I was on.

Fast forward to 1992, when, as a 17-year-old, I was just too young to vote in that year's general election. I had a driving lesson on polling day, and I will never forget asking my instructor, an ordinary working class bloke, who he would be voting for.

He said he had been thinking of voting Labour for months, but that he would "probably bottle out and vote Tory" after all.

In 1995 Tony Blair was elected Labour leader. I admit, I fell for it. He inspired me, so I joined the Labour Party. They were the party of the working class, of the common man - they were socialists, right?

In New Labour on the other hand, policy was decided by a few at the top, and the discussion of political ideas took a back seat.

There were election victories to celebrate, but as a local government worker, I found myself on strike over pay and pensions under a Labour government. It seemed absurd, and I was struggling to square the circle. This was not what I had envisaged.

In 2003, Britain joined George W Bush in the invasion of Iraq. I demonstrated in London against the war, and said I would step down as constituency chair and leave the Labour Party if we went through with it. I knew I had to go.

I became heavily involved in my trade union, which was the focus of my political activity until, in 2010, the Con-Dems were 'elected', and I felt compelled to do something. Against my better judgement, friends in the Labour Party helped persuade me to re-join. I hoped it would feel as if I was back where I belonged, but it never did.

Labour councils pushed through cuts and Ed Miliband committed Labour to following a programme of austerity. I could see the election defeat a mile off, Labour was not offering an alternative.

I did not see Jeremy Corbyn's victory coming, however I supported and welcomed it. The contest itself reopened old wounds in Labour, and, while the left of the party has won, it's not the end of the battle. I began to ask myself whether Labour's so-called 'broad church' was more of a cavernous cathedral. How had I ended up in the same political party as the likes of Liz Kendall, Chuka Umunna and Tristram Hunt?

I know a few local Socialist Party members that sold the Socialist and have always enjoyed talking to them. They regularly run a stall in my local city centre, where I recently signed a petition on the NHS and bought a copy of the paper. We got talking, and they invited me to their next meeting, and to Socialism 2015.

It was at this event, listening to the inspirational words of comrades at the various sessions and the rousing speeches of Roger Bannister, Hannah Sell, and others at the rallies, that I realised the Socialist Party is where I belong; where I had always belonged. I already feel as if I am finally home.