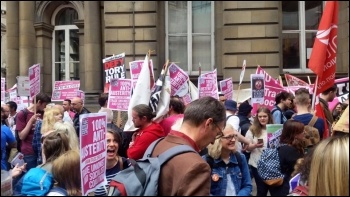 TUSC placards being distributed as the People's Assembly anti-austerity demonstration gathers in the City of London on 20th June., photo Sabah   (Click to enlarge)

It's only five months since the general election, when champagne corks popped in the mansions of Tory MPs and boardrooms of their corporate sidekicks. But jubilation among the establishment is giving way to a dawning reality that austerity - planned poverty - is not so popular.

The first doubters were the 70 Tory MPs in the most marginal seats who realised that by cutting tax credits to low-income families they would be hit hard by angry electors.

Now, as council budget proposals for next year see the light of day, opposition to further cuts is shaking the ground beneath the sheltered gardens of West Oxfordshire MP, David Cameron.

On 14 November, 500 campaigners organised a 'baby-blockade' in Oxford. Protests across Oxfordshire at the planned closure of 36 of 44 children's centres by the Tory-led council have pushed a "disappointed" Cameron to write to the council leader, urging him to think again.

What pitiful hypocrisy from the architect of austerity, whose militant mantra of the super-rich '1%', is 'cut the deficit to create prosperity for all'. Yet funding for children's centres across England has been cut by 28% in just three years.

Cameron complained in his letter that Oxfordshire council could avoid service cuts because the reduction in government financial support to the council was only a "slight fall". And, anyway, couldn't backroom staff be cut instead?

The Socialist Party warned that these austerity policies would fail to revive the economy and instead would simply line the pockets of the mega-rich - who are now twice as rich as they were in 2009.

As the mighty tremble, the potential exists for a knock-out blow to be delivered. Jeremy Corbyn's welcome anti-austerity stand must be matched by Labour councillors.

If allied to anti-cuts campaigners and council trade unions, this could lead to a national revolt against council cuts (see editorial pages 6&7). Oxford City Labour council could put itself at the forefront of this battle.

At a recent meeting in Oxford, young Socialist Student activists backed the Trade Unionist and Socialist Coalition (TUSC - an electoral coalition involving the RMT transport union, the Socialist Party and others) letter to Labour councillors appealing for them to vote against cuts.

If the House of Lords can vote against cuts, why not Labour councils?