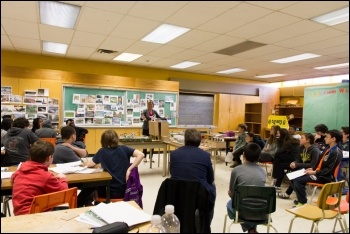 Michael Gove the previous Secretary of State for Education declared in 2014: "we've done all we can to ensure the authority, respect and prestige of teachers is enhanced in and beyond the classroom." This would raise a laugh in any staffroom. Even Ofsted, the schools inspectorate body, not one for rocking the boat with central government, has warned there is a looming recruitment crisis.

The introduction of performance related pay means increasingly teachers' pay is linked to exam results; not enough students passing means no pay rise. This naturally has a detrimental effect on the advice offered and the relationships built between staff and students.

In a National Union of Teachers (NUT) study 86% agreed with the statement "Pupils are encouraged to take subjects that will count in the league tables irrespective of their interests/aptitudes." It is just another thing which explodes the myth that school reforms are all about giving young people the best possible chance in life.

These measures are not confined to secondary schools with the government introducing baseline assessments for children at the start of primary school and the slated return of formal SATs for seven year olds, alongside a host of other tests. A teacher from an 'outstanding' primary school sums up the impact in the NUT's 'Exam Factories' pamphlet: "It is heart breaking to have a four year old approach me in tears because they 'are still in the bad group for reading' because they have already been streamed."

Something even more sinister lies behind the aggressive scrutiny and data-led micro management of schools. Education secretary Nicky Morgan has said: "In future, we could try to link qualifications to tax data too in order to demonstrate the true worth of certain subjects."

The Tories, egged on by their supporters in big business, are opening up our schools to the big corporations and their interests. Schools can't technically be run as profit making businesses yet but many of the allied support services and supplies are provided by large corporations who have their eyes on how they can cream off funds from the public sector.

Standardised tests mean more standardised teaching with more and more schools adopting centralised curriculums. In some schools, particularly the academies, this could be used as the basis for employing more unqualified teachers who can simply 'deliver' a packaged curriculum.

Schools are also faced with a funding crisis. Many budgets are trimmed to the bone as a result of changes to pension and national insurance payments but it's about to get worse when the government introduces a new funding formula.

It will supposedly make things 'fairer' with allocations closer to parity between big cities and rural areas. Teachers and communities should welcome more funding for rural and coastal schools but not at the expense of urban ones.

It may seem a bleak picture but teachers are willing to fight. The Tories' trade union bill is designed to make it difficult for education unions to achieve legal ballot thresholds and the ability to hire supply teachers to break strikes will act as a green light to the most anti-union employers.

The victory of Corbyn shows a changing mood in society and suggests a desire for a political alternative. His call for a 'rethink' on 'free schools' and academies has broken the Westminster consensus on privatisation too.