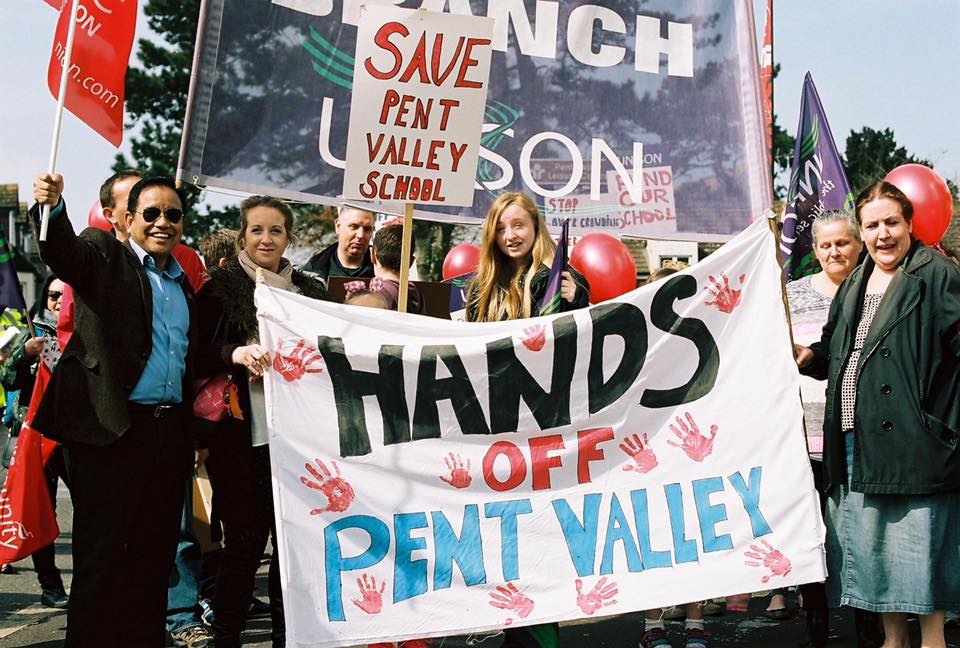 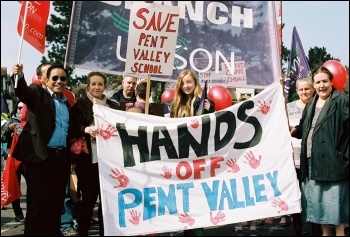 A hundred demonstrators staged a loud, colourful march through Folkestone on Saturday 2nd April against the threatened closure of Pent Valley secondary school. The closure is being driven by Tory-controlled Kent County Council (KCC) and is the latest in a series of school closures across Kent.

Closing Pent Valley would result in higher class sizes in an area that expects to have rising registers over the next few years. It would force students to attend schools like Folkestone Academy, which is not accountable to parents and is already underfunded.

Kent County Council has reserves of £80 million which the trade union-backed Save Pent Valley campaign is calling on the council to use, to keep the school open and to fund education properly. Campaigners expect the elected councillors to do what the community wants: oppose cuts and fight for extra funds. 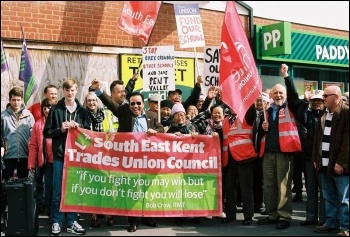 Significantly, on the same day that a small group of racists had organised a protest against immigration in Dover, Folkestone’s Nepalese community joined parents, teachers, students and trade unionists to fight to defend their local school.

The organisation of the march was a classic example of what’s possible when unions swing into action. Socialist Party members in Unison and Unite arranged for the printing of thousands of leaflets that parents and students ensured were distributed to Pent Valley and surrounding schools.

Rallying outside the school gates, the big question was, what should our next step be?

Teachers, support staff and students wield the most power. A determined union campaign, which utilises the massive support of the local community and which seeks to give confidence to workers at the school, that resistance is possible, is crucial. One NUT member present at the rally promised she would be taking this demand back to the Folkestone NUT branch. 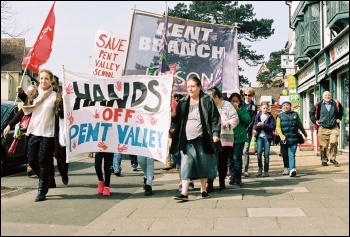 Students from the school spoke at the rally. Despite the refusal of time off, some attended last month’s protest in Maidstone, outside KCC headquarters, during a council meeting. Campaigners spoke at school assemblies and students have been discussing a sit-down protest in the playground of the school to make their opposition known.

A successful ballot for strike action by teachers and support staff, coordinated with a student strike and a further community protest, would apply critical pressure to KCC at a time when its sham consultation is being challenged in court by the Save Pent Valley campaign.

Confidence has already been lifted by the NUT announcing its determination to strike against the government’s plan to force all schools to become academies. Now is the time to call for united action at Pent Valley between the three major unions.

This version of this article was first posted on the Socialist Party website on 4 April 2016 and may vary slightly from the version subsequently printed in The Socialist.