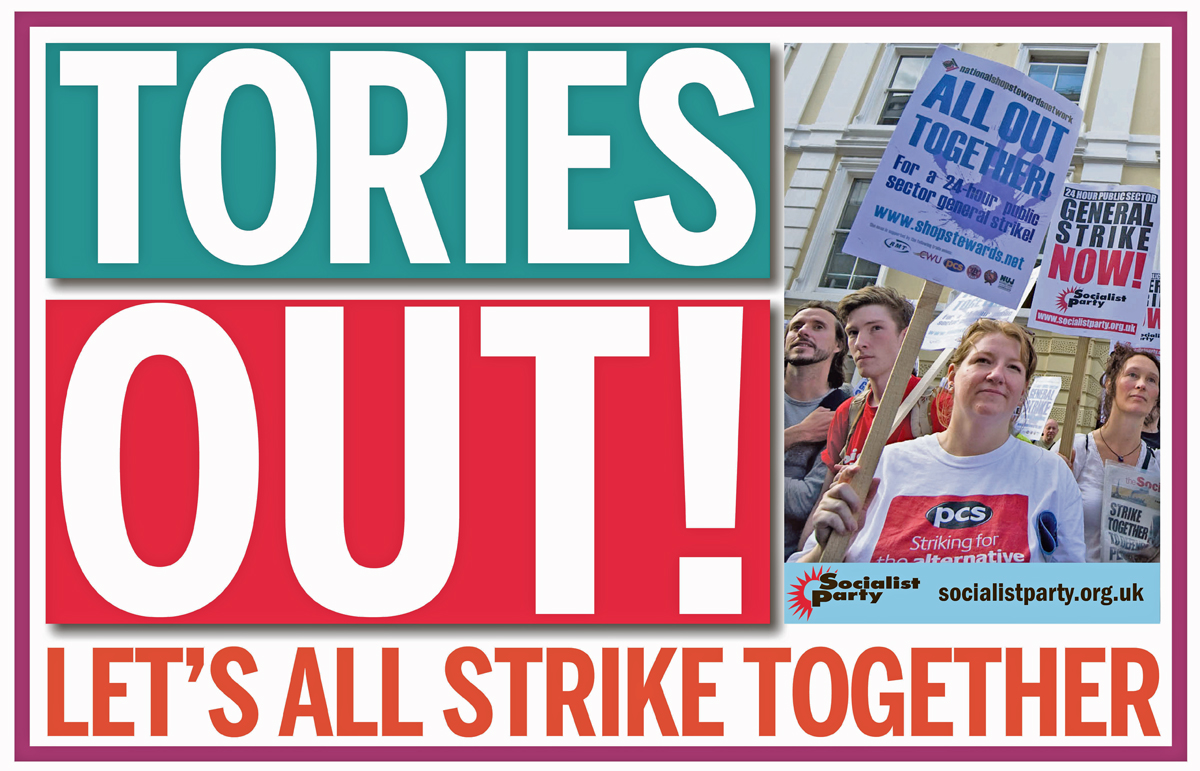 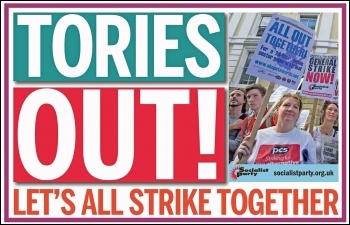 Tories out! Meme by Sarah Wrack   (Click to enlarge: opens in new window)

Not only can we not trust the Tories to tell the truth about their tax arrangements, we can’t trust them to run the country in the interests of anyone other than the super-rich 1%. We need to get them out.

The events around the Panama Papers prove, as if proof were necessary, that Cameron and Co and their families have vast wealth. And they, like the bosses, bankers and the rest of the 1%, see it as their right to maximise and increase their riches – at our expense.

In Edinburgh the physical collapse of schools built through Private Finance Initiative (PFI) provides a graphic example of what putting profit first means.

Following Cameron’s eventual admission that he did actually benefit from his father’s tax haven hoard the demand for him to go rang out. Of the first 5,000 people who voted in a Mirror online poll, 95% wanted Cameron to resign.

Watching the movement in Iceland that brought down the prime minister and has set its sights on a change in government has whetted our appetite to get the Tories out.

Let’s build a mass movement that could be capable of just that. The Socialist Party calls on the anti-austerity forces around Jeremy Corbyn and the trade union leadership to organise a powerful national campaign to drive the Tories Out!

The first step should be coordinating strike action of all those workers with ongoing disputes as preparation for a 24-hour general strike.

This is a weak government – voted for by just 24% of the electorate – and a divided government as revealed by the resignation of Iain Duncan Smith. They are split down the middle by the EU referendum. That’s one reason to vote to leave the bosses’ EU. Cameron could be forced to resign and call a general election.

The type of society we live in, capitalism, is so unequal that the richest 1% of the world’s population own more wealth than all the rest of us combined. Unsurprisingly, increasing numbers of people are searching for an alternative.

A democratic socialist society would be able, through planning the use of the world’s enormous wealth and resources – not squirreling it away in tax havens – to provide decent jobs, homes and services for everyone.

In publishing their tax returns, Cameron and Osborne have shown that they are not ‘in it’ with the rest of us. Every year tens of thousands of pounds of unearned cash enters their accounts in the form of rent and dividends, not to mention the odd six-figure familial ‘gift’.

In rent payments alone, Cameron receives three and a half times the median income. Osborne receives around £20,000 more than the average income in dividends from his family’s wall paper company. Both qualify for the top rate of tax – which they cut, further enriching themselves and other millionaires.

The more that this story runs, the more the Tories are exposed as a government of the very rich exclusively for the very rich. The Sunday Times points out that Samantha Cameron’s father owns property and land estimated at more than £20 million.

This scandal contains within it a surfeit of scandals. Not least is the appointment of Edward Troup, executive chair of HM Revenue and Custom to oversee the inquiry into any Panama-related wrong doing. This former corporate lawyer, who has spent years advising offshore tax havens, wrote in the Financial Times in 1999 that “taxation is legalised extortion”. Tax avoidance and evasion through loopholes is legalised theft from public services. 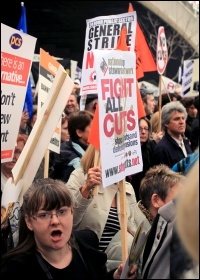 Protesting against the cuts, photo Senan   (Click to enlarge: opens in new window)

The leak has re-emphasised that we have a cabinet of millionaires including health minister Jeremy Hunt. In the interests of private health profiteers he is waging war on the NHS and pushing for a contract that would mean a 30% pay cut for the junior doctors. Let’s put it more clearly – 70 MPs (Cameron and Hunt included) have links to private healthcare firms.

There is a revolving door between big business and pro-rich government – which was also the case under New Labour. Last year the Telegraph estimated that Tony Blair ‘earned’ between £50 million and £100 million since quitting as prime minister, largely in consultancy fees from despotic regimes.

This is at a time when Universal Credit, the bedroom tax and the wide range of other austerity measures have reduced the incomes of hundreds of thousands of people – a million have sought support from foodbanks as a result. In January, Ipsos-Mori found that just 21% of Britons trust politicians to tell the truth. And the Tories are not popular – they took power with the support of less than a quarter of the electorate.

Unusually for the Guardian its editorial actually summed up what most people feel: “the suspicion here is not corruption, but the veiled pursuit of the interests of one class against another.”

That is what capitalism is – a system based on exploitation of the many, the working class by the bosses, the capitalists. This class, the dominant class in capitalist society, has enormous power to run society it in its own interests.

Tory Alan Duncan defended this status quo when he said that demanding MPs publish their tax returns: “risk[s] seeing a House of Commons which is stuffed full of low-achievers who hate enterprise, hate people who look after their own family and know absolutely nothing about the outside world.” But a parliament dominated by millionaires is completely unrepresentative of the majority, the working class, which is barely heard.

Duncan has since apologised for his comments but they only expanded on what Tory environment minister Amber Rudd said on the Marr show: “we don’t want to put people off who might have substantial assets”.

These events will see the appetite for greater democracy and accountability grow. Socialists support all democratic rights, including voting for parliament, which were fought for by the working class. But we want far more than this truncated version of democracy.

Instead of hoarding wealth, socialist and Marxist MPs in the Socialist Party’s predecessor Militant – Dave Nellist, Terry Fields and Pat Wall – only took the average wage of a worker, instead of the current bloated MPs’ salaries. Their accounts were available for inspection and circulated to all constituents. 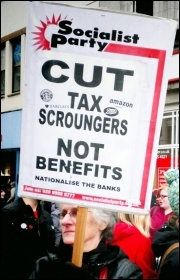 The Socialist Party calls for the abolition of the House of Lords and the end of fixed term parliaments – which a mass movement or even a defeat of the government in the EU referendum could render null and void.

We have also raised the need to have two-year parliaments and the right of recall of MPs to expand democratic participation. We support votes at 16 and an end to the social cleansing of the electoral register. More would be needed to achieve genuine democracy – a democratic socialist state.

But these would be important steps in challenging the current set-up with power resting in the hands of the elite. But what is crucial is the building of an independent political voice for the working class.

In Iceland, where Panama leaks led to the Prime Minister’s resignation, the movement has now set its sights on bringing down the government. The Pirate Party, which currently has four MPs, is set to be the winner. This shows the potential for a party to quickly gain support in a situation where the masses are attempting to challenge the status quo.

What is needed is a party that is 100% committed to fighting for the interests of the working class and all those suffering austerity.

A third of those backing Bernie Sanders – who stands for free health care, free education, a $15 an hour minimum wage and taxing the rich to pay for it – have said they will not vote for Hillary Clinton if Sanders is not elected as the Democratic candidate for US president. This represents the growing understanding that ‘lesser evilism’ is not enough – that an independent voice of the working class must be built.

Here in Britain, the election of Jeremy Corbyn was a good start but the party still contains a majority of MPs and councillors who do not see the need for fundamental change in society in the interests of the 99%. If Labour is to play a role in ending the domination by the 1%, it means a fight within Labour to kick out the Red Tories.

Building a party of the working class requires a socialist programme that can begin to fight for a society in the interests of the millions not the millionaires – starting with democratic and permanent nationalisation of the banking system, railways, steel and the commanding heights of the economy under workers’ democratic control and management.