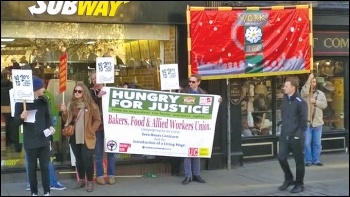 Chants demanding a £10 an hour minimum wage rang out through Wakefield city centre on 14 April.

Activists from bakers' union BFAWU, campaign group Youth Fight for Jobs and the National Shop Stewards Network took part in a global day of action against low pay and for union rights in the fast food industry.

Over the preceding week, we had visited fast food workplaces across Wakefield and nearby shopping centres. We've received an enthusiastic response.

On the evening after the protest, a public meeting heard via Skype from a fast food worker in New York striking for a $15 minimum wage. We gained ideas from that on how to take the campaign forward locally.

Socialist Party member and new BFAWU member Tom commented: "We've had a fantastic few weeks of raising awareness of the BFAWU and its call for a £10 an hour minimum wage. And if we continue taking that message to local workplaces, I'm confident we can build BFAWU among fast food workers in Wakefield."