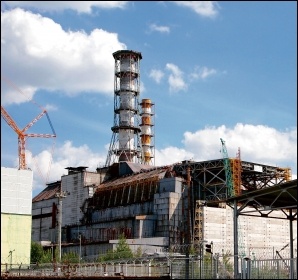 On 26 April 1986 an explosion destroyed the nuclear power station in Chernobyl, about 100 miles north of Ukrainian capital Kiev (then part of the Soviet Union). This explosion, the worst 'nuclear incident' in history (excluding the bombing of Hiroshima and Nagasaki), set back confidence in 'clean' nuclear energy for a generation.

The nuclear reactor at Chernobyl used uranium fuel rods surrounded by graphite, which absorbed some of the heat of the nuclear reaction. Water piped past the fuel rods and graphite carried away heat, producing steam to drive turbines to generate electricity.

If the hot graphite and uranium rods should come into contact with the water, an explosion would produce radioactive steam.

30 years ago, this happened. Technicians, trying to fix a recurrent problem, had carried out a reckless experiment - and a sudden power surge ruptured the cooling water pipes.

Following earlier accidents at Sellafield, UK, and Three Mile Island in the USA, reactors in Europe and USA were built inside a 'containment' shell, aimed at stopping the escape of any radioactive gas. Chernobyl had no such containment, and so a radioactive gas cloud was spread west by winds over Europe and Scandinavia.

At first, the authorities tried to keep the disaster quiet. Only two days later, when workers at a nuclear plant in Sweden found their radiation detectors hitting high values even before they got to work, was the Soviet government forced to make any announcement.

How many were killed by the disaster? Proponents of nuclear power have tried very hard to play down the death toll. They only acknowledge the 30-50 mostly firefighters and technicians who heroically worked to shut down the reactor, with no thought to their own safety, and who died of radiation poisoning.

But many thousands more were affected by radiation. A conservative estimate suggests 30,000 to 90,000 deaths. But even that figure underestimates the massive suffering caused.

For Western supporters of nuclear power, Chernobyl was the result of Stalinist bureaucratic top-down management. This was certainly true, but there was an unspoken added assumption that it simply couldn't happen in the open, democratic, technologically advanced West - until five years ago.

On 11 March 2011, an earthquake caused a tsunami (tidal wave) which overwhelmed the Tokyo Electric Power Company (Tepco) Fukushima Daiichi nuclear plant in Japan. The result was a meltdown of its four nuclear reactors.

Prompt flooding of the reactors with seawater could have cooled the reactors quickly enough to prevent meltdown, but this was delayed because it would ruin the costly reactors.

When the government finally ordered the use of seawater, it was too late to prevent meltdown. Clouds of radioactive steam were blown out.

Estimated fallout at Fukushima was only between 10% and 40% of that from Chernobyl, and the number of deaths resulting from the accident was also probably far smaller.

However, at least three US Navy sailors on the aircraft carrier USS Ronald Reagan assisting the Tsunami relief effort off the coast of Japan and exposed to the Fukushima radiation, have now died from mysterious illnesses. This is according to Charles Bonner, an attorney representing 247 of the sailors in a class action lawsuit against Tepco.

Moreover, over 150 thousand people had to evacuate their homes, and five years later many more still live in contaminated areas. They have not been taken care of or compensated adequately.

The plant is still releasing radioactive materials to the air and a huge quantity of radioactive water is being stored with no suggestion as to how it can be got rid of.

Recently, Tepco began releasing radioactive tritium into the sea from the 300 tonnes of contaminated water generated daily at the plant.

Japan is one of the world's most well-prepared countries in disaster management. But the authorities still failed at every step in their response to the ongoing disaster at Fukushima, showing that no country can be effectively prepared to mitigate a large nuclear accident and a major release of radiation.

These two very different nuclear disasters show the fallacy of 'safe' nuclear energy, especially when the control of nuclear installations is in the hands of an undemocratic bureaucracy as at Chernobyl, or a capitalist company as at Fukushima.

Here in Britain, the Tories are pushing new nuclear power for political reasons - to reduce reliance on imported oil and gas.

As socialists we demand complete public ownership of the energy system, with a democratically controlled national plan for power generation and distribution, taking into account safety, renewability and effects on the environment.

On the 25th anniversary of the disaster, the Committee for a Workers' International (CWI) published interviews with 'Chernobyltsi' - victims of Chernobyl - painting a horrific picture of the effects on people living near the plant (The Rewriting of Chernobyl's History, www.socialistworld.net).

Rob Jones of the CWI, and Svetlana (a youth rights activist from the area, herself now sadly dead from cancer at the age of 20), spoke to Anna: "I was a child at the time of the explosion. Now the next generation of children is going to school. Many, like my kids, are in and out of hospital. My sister's child is permanently bald. My husband can't get work. Yet the government is doing all it can to wipe the memory of Chernobyl from the consciousness of the Ukrainian people."