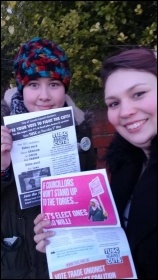 Labour councillors in Lincoln have been very reluctant to state that they will stand up to Tory cuts. We are seeing a significant number of public services in the city viciously cut, including one of our fire stations in the south of the city. If these cuts go ahead, lives will be put in immediate danger. Lincoln TUSC and our supporters find this completely unacceptable. We are putting forward a no-cuts alternative.

We have been tirelessly campaigning alongside the firefighters union FBU in order to halt these plans. We have received a huge number of signatures for our petitions.

So far, the response to the campaign has been really positive, which has motivated me even more. Teams of supporters have been more than willing to help with leafleting, canvassing and spreading our message.

Our presence in the city centre has piqued interest and it's been fantastic to openly discuss local issues with a broad range of people. It is abundantly clear that the public are seeking real change and they no longer have faith in the mainstream parties.

Lincoln TUSC will fight on behalf of working class people who feel deflated and defeated, disillusioned by the continuation of cuts to vital public services.

I am so proud to have the opportunity to stand under the TUSC banner and present myself as a candidate to the people of Abbey ward. I feel that we can make a real difference in Lincoln and continue to struggle for a fairer city, where people can access the services they need without fear of them being cut.