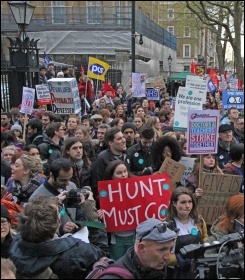 "By standing up for ourselves, we are standing up for the NHS" said Dr Yannis Gourtsoyannis, a member of the BMA's (doctors' union) junior doctors committee, speaking at London's May Day demonstration on 1 May.

The BMA's junior doctor committee meets on 7 May to discuss future action following the latest, escalated round of strikes on 26 and 27 April which included a full withdrawal of labour for the first time.

The meeting should include a call to the TUC general council to back the junior doctors by calling a national demonstration. This demand was put forward by the civil servants' union PCS and firefighters' union FBU but was scandalously rejected by the TUC on 27 April. The TUC has, at every turn, left the junior doctors' struggle isolated.

The organisation and solidarity required was shown on the first day of the most recent strike action, as 5,000 marched in a London joint demonstration called by the North and South Thames region of the BMA and the London region of the teachers' union NUT.