Link to this page: https://www.socialistparty.org.uk/articles/22738 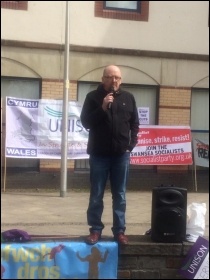 Saving steel jobs and fighting council cuts was the focus for over 50 trade unionists, socialists and political activists who attended Llanelli Trades Council and Carmarthenshire Unison's May Day rally on 30 April.

The rally addressed the need to save steel jobs across the industry particularly at the local Trostre plant. The campaign against public sector cuts was highlighted by Hannah Lawson, a PCS rep from the National Museum Wales, where workers are on indefinite strike in response to management's threat to sack the workforce and impose new contracts cutting weekend payments.

Mark Evans, Carmarthenshire Unison secretary and president of Llanelli Trades Council, outlined the fightback against cuts in Carmarthenshire and the need to build a mass campaign around the branch's no-cuts budget.

Ronnie Job, bringing fraternal greetings from Swansea Trades Council, explained the need for 100% nationalisation of Tata steel as the only way to secure a long-term future for the industry. Owen Herbert, of the transport union RMT, explained how the closure of the steelworks would have a wider devastating effect on the communities, industries and jobs which depend on steel.