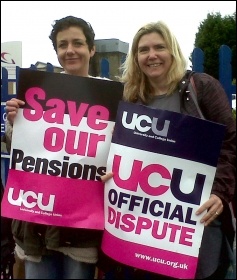 Members of lecturers' union UCU in higher education will walk out for two days on 25 and 26 May over pay.

Staff will also begin working to contract from 25 May, which means they will refuse to work overtime, set additional work or undertake any voluntary duties like covering timetabled classes for absent colleagues. If no agreement is reached in the coming weeks, members have agreed to target further strike action in June and July, and are considering additional action in August to coincide with the release of A-level results.

The union is also beginning preparations for a boycott of the setting and marking of students' work, to begin in the autumn if an acceptable offer has still not been made. The dispute has arisen following a pay offer of 1.1% from the employer body, the Universities and Colleges Employers' Association (UCEA), which the union has described as 'an insult'.

UCU said universities could afford to pay more and that the latest offer does little to address the real terms pay cut of 14.5% suffered by higher education staff since 2009. The squeeze on staff salaries comes at a time when pay and benefits for university leaders have increased, on average, by 3%, with the average pay and pensions package for vice-chancellors standing at over £270,000.

The United Voices of the World (UVW), who mainly organise low-paid cleaners, many of them migrant workers, have been running a campaign in Topshop for the living wage. Two members have been sacked in the process. As a result, the union has called a national day of protest on 14 May.

The centrepiece will be a protest outside the flagship Oxford Street, London store from 5pm. The two Topshop cleaners have also been subjected to gross acts of bullying and victimisation for having merely joined a union and led the campaign for a living wage.

To top it off Topshop boss Philip Green has just made £600 million on the back of robbing 20,000 BHS workers of their pensions, and making 11,000 workers redundant. Join the protest on Oxford Street and look out for protests organised at other stores around the country.