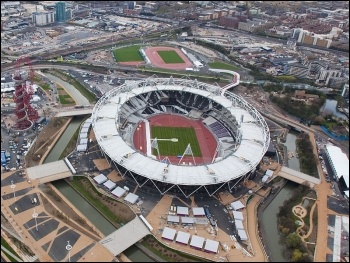 "Eddie the Eagle" is based on the story of real-life British ski athlete Michael Edwards. He was the first to represent Great Britain in ski jumping, doing so at the1988 Winter Olympics in Calgary, Canada.

It's a touching, feel-good movie; an inspirational film about a man giving his maximum.

Eddie was a self-funded, working class underdog. He narrowly missed out on joining Britain's downhill skiing team, so switched to jumping.

His lack of ability in this discipline was matched only by his determination. The media saw Eddie as a joke, but to many he exemplified the Olympic spirit of perseverance.

And Eddie wasn't just a media laughing stock. Which school you went to seriously affected how welcome you'd be in the Olympics team.

It's quite telling that after the 1988 winter Olympics, rules changed, making it a lot harder for people without adequate access to funding, training and equipment - working class people - to participate.

You have to be placed in the top ranks of previous international events, not just selected by your country's team. This arbitrary condition leaves poorer athletes - and poorer nations - out of the Olympics.

The Tories and those on top might blame comprehensive schools. But working class people are well aware that cuts and privatisation exclude them from trying out sports, and accessing training.

The 2012 Olympics in Stratford came with the promise of more sporting facilities in east London. On the one hand, these were built. But on the other hand, big chunks were subsequently sold at a loss to privateers.

The film explains that Olympic committees are not adequately funded by governments, and rely on sponsorship. Sponsors demand record-breaking athletes. However, its narration stops just before Eddie is excluded by the financial elite.