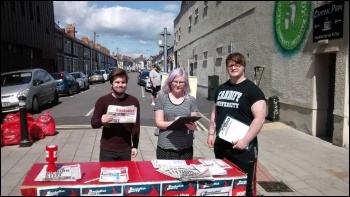 On the surface there has not been a huge change in the political complexion of the Welsh government - Welsh Labour lost just one seat and will be able to hold on as a minority government with the opposition split between three parties. But under the surface the election showed how much things have changed in Welsh politics.

Welsh Labour held on to most of its seats but this masked a growing discontent with the Carwyn Jones government. Its share of the vote fell by nearly a fifth from 2011. In the absence of a mass socialist opposition it was Ukip, hiding its right-wing ideas, and to a lesser extent Plaid, who benefited from this disillusionment.

A Corbyn-type campaign opposing the Tory cuts could have enthused working class people to support Labour, but Carwyn Jones has made clear his opposition to the leadership of Jeremy Corbyn, so it is business as usual in Wales.

One obvious change is the election for the first time of seven Ukip assembly members. All were elected in the proportional representation ballots of the election in the party lists. Ukip mounted an expensive corporate-funded campaign with lots of glossy leaflets and billboards and hardly mentioned immigration (apart from one xenophobic outburst by a candidate). Instead its slogans were 'Save Our Steel' and 'Save Our NHS', appealing to disillusioned traditional Labour voters.

Its biggest votes came in the ex-mining communities in the South Wales valleys where Labour used to get 70% of the vote. Disillusionment with Labour has been exploited by Ukip and it came second in four constituencies. Where Plaid Cymru positioned itself as a left alternative to Labour, they gained. Plaid won a significant victory in the Rhondda and in Caerphilly and Blaenau Gwent pushed Ukip into third place.

The Trade Unionist and Socialist Coalition stood on the three regional lists for South Wales and gained 2,040 votes, despite no media coverage. Our vote was undoubtedly hit by a layer of Labour supporters who supported TUSC's message but were concerned that a drop in Labour's vote would be used to attack Corbyn.

But TUSC candidates won all the debates that they participated in, exposing Ukip and putting a clear anti-austerity message. Candidates won the most applause in the hustings, being closer to the position of Corbyn supporters than the candidates they had come to support.