Editorial of the Socialist, issue 903 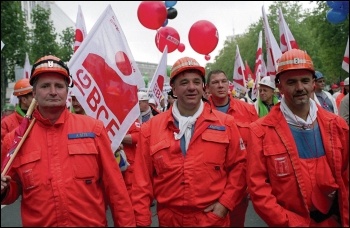 "As the debate on the EU referendum intensifies, so do the possibilities for a split in the Conservative Party." This is not a quote from the Socialist or even an opposition politician, but from Tory MP Jacob Rees-Mogg writing in one of the main mouthpieces of capitalism, the Financial Times.

He goes on to compare the divisions emerging in the Tory party today to those that led to chasms within it in the mid-19th century over the repeal of the Corn Laws. Nobody can deny the scale of the crisis facing the Tories as a result of this referendum. And it will be far from an easy task for them to put Humpty back together again, regardless of the result.

This was always a weak government - voted for by 24% of the electorate and with a parliamentary majority of just 12. And now, unable to function as one party, it is a lame duck awaiting its fate on 23 June.

That explains why they have been forced to retreat, at least partially, on so many issues. Initially determined not to give an inch to the junior doctors, Jeremy Hunt was forced back to the negotiating table. Nicky Morgan's attempt to legislatively force every school to become an academy had to be re-hashed. Cuts to tax credits were put on the back burner until the planned (but much-delayed and far-from-guaranteed) introduction of Universal Credit.

Equally, this paralysis explains why there was very little policy of substance included in the recent Queen's Speech. A continuation of austerity absolutely, but as one Labour MP was quoted as saying: "It was mostly re-announcements of previously ditched polices, and small measures which just tinker at the edges. It shows that this government are completely hamstrung by the referendum."

Cameron is backed into a corner trying to fight off foes from all directions. He faces threats from the right-wing Tories campaigning for Leave - a position which is more popular with the Tory party membership at large. He's forced to talk almost-left on issues like jobs and the health service in an attempt to win over working class people to his Remain position. But he must keep big business on side and never drop the clear fact that it's their interests which he will always put first, including in this referendum.

And then of course, there's Ukip. Nigel Farage has predicted that a third of Conservative Party members could defect to Ukip in the case of a victory for Remain. While this is unlikely to be a scientific assessment, having spent 25 years putting the EU centre-stage of all its politics, Ukip was clearly always going to see this as an opportunity to shine.

And many working class and young people will vote Remain because of an understandable fear that a Leave vote would mainly benefit Ukip and lead to a strengthening of racism and anti-immigrant sentiment and policies.

But Ukip has gained ground and has been expressing its racist politics while the UK is in the EU. The status quo is clearly not working to combat this.

This is because it's not membership of the EU that is decisive in tackling the growth of Ukip or its politics. In fact the racist policies of the EU - which continues to brutally deport thousands of refugees from Greece to Turkey - are contributing to gains for the right across Europe.

The ground for Ukip to grow is provided not by Brexit but by vicious austerity, repulsion with the political establishment and a deep desire for working class people to take control of their own lives and have the chance of a different type of society. 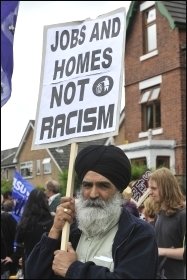 Ukip doesn't represent this alternative - it is yet another party of big business whose politicians vote for cuts to jobs and services just like the other capitalist parties. But its rhetoric is designed to appeal to a layer of working class people looking for something different.

Polls have consistently shown Ukip voters are more likely than average to support nationalisation of the railways and utility companies and other pro-worker policies. Ukip recognises this base of support. In the recent Welsh elections, where Ukip won seven assembly members, they hardly spoke about immigration at all, instead using slogans like 'save our steel' and 'save our NHS'.

The way to combat this support is therefore to build an alternative capable of actually achieving this kind of policy and answering the fears of working class people about how best to defend their jobs and services. This requires building a strong, united movement against austerity - which could cut across racial division and bring about real change to ordinary people's lives. Why would such a movement opt to give a vote of confidence to an institution that is fundamentally opposed to these aims, as the EU is?

To nationalise the railways, for example, would require a confrontation with the EU, which places obstacles in the way of state intervention and nationalisation. It would be one extra barrier for a left government to overcome.

If a lead had been given to a left Leave campaign by the trade union leaders and Jeremy Corbyn and John McDonnell, any benefit to Ukip could have been cut across. Instead they have, with a few honourable exceptions, fallen into line behind Cameron and the official Remain campaign.

This means that in the mainstream debates no working class voice is heard. Instead we have two sides trying to out-racism each other - as was shown clearly recently in the debate over the possible future admission of Turkey to the EU.

But, despite their mistake, it is still a Leave vote that would present the best chance to kick out the Tories and offer a huge opportunity for Corbyn's Labour to come to power well before 2020. Around the world it has been shown time and again that working class people will favour a left alternative over a right-wing one when this exists and is seen as a serious force.

When Greek party Syriza was presenting a left stand against austerity, it was propelled to power by the working class (before later capitulating to the EU and continuing to implement its austerity memorandums). At one stage, when seen as most radical and serious, Syriza was supported by more than 60% of those who had previously voted for the far-right Golden Dawn.

A Labour Party standing on the programme that won Corbyn such huge support in last summer's Labour leadership race - for a £10 an hour minimum wage, against privatisation and cuts, for free education and so on - could undoubtedly triumph against the Tories and Ukip.

The crisis in the Tory party is not a unique phenomenon. All over the world the traditional parties of capitalism are disintegrating. In Spain, a new general election has been called after only six months, because no government could be formed after the last one. The main capitalist party, the PP, lost 3.6 million votes. In Portugal the last government collapsed after only weeks in power. The fault lines are shifting and an entirely new political landscape is possible - shown this time in Britain. This referendum could lead to major splits - not only in the Tories but also in Labour and even in Ukip itself.

The approach of looking purely for the 'lesser evil' cannot defeat the right. In the US, the establishment 'left' would like working class people to fall into line behind Hillary Clinton, raising the prospect of a Donald Trump presidency as a whip. But workers in the US are sick of the same old politics of the super-rich 1%. Which is why it's not guaranteed that Clinton would win such a race.

In fact several polls have shown that Clinton's left-wing challenger, Bernie Sanders - with his call for a 'political revolution against the billionaire class' - would stand a better chance of defeating right-wing anti-establishment candidate Trump.

Because ultimately only a socialist, independent working class position can defeat the right wing. That means building parties everywhere that can represent the mass movements that will be necessary to change our futures.

The current weakness of Cameron and his Tory government offers a unique opportunity for workers to press this home. Imagine the opportunities that would face the labour and trade union movement if Cameron was forced to resign (as he would be in the case of a Leave victory) and the more so if a general election was called. Fighting for a strong working class Leave vote on 23 June can contribute to achieving that.

No unity with Tories:

What lies behind UKIP?

TUSC challenge to UKIP & Tories: 'Let's debate who should be the voice of Leave'