Link to this page: https://www.socialistparty.org.uk/articles/22996 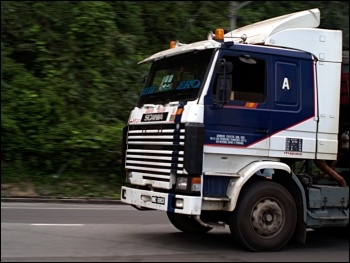 Lorry drivers at Marshalls paving suppliers are striking across the country because of the firm's refusal to honour an overtime agreement. All other sections of the workforce earn 'time and a half' - including forklift operators, who sit in the cab next to drivers earning a third less them!

There was good morale on the picket line at the St Ives, Cambridgeshire depot on 13 June. The strike began at 4am and went on until 7pm. Spirits were high. Drivers have refused to work on Saturdays on four previous occasions.

Marshalls has sites across the UK and is a major supplier for public and corporate bodies, as well as households.

Workers are incensed, particularly as the firm appears optimistic about its prospects in the annual report to investors.

There was also a concern at the St Ives site that some managers had not been taking the grievance seriously, but instead had resorted to bullying.

This version of this article was first posted on the Socialist Party website on 14 June 2016 and may vary slightly from the version subsequently printed in The Socialist.