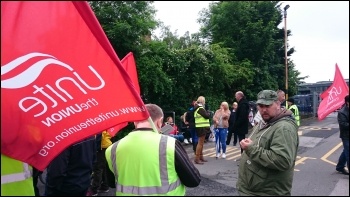 "They make £11 million in profits in Leeds alone, and all their offer adds up to is around half a million. It's a shame it has to come to this to get them to give us more." Those were the words of one of many Unite the Union members picketing the two First Group bus depots in Leeds on 13 June.

Over 100 pickets were at the Hunslet depot, while around 30 were outside Bramley. The latter was shut completely for the day. Buses were parked three deep at Hunslet around 8am. By that point the depot would usually be largely empty.

Management had prepared for the strike, sending buses to the disused Cherry Road depot and offering higher pay and bonuses to scabs and managers. But the number of buses operating was far less than the hundreds that usually run, probably not enough to run even the skeleton service that First tried to provide.

Drivers in Leeds are paid £2 an hour less than those in nearby Halifax. Bosses offered drivers a 3% raise for the year, half not be paid until January. Meanwhile managers have had an increase of up to 5% in pay and bonuses.

One worker explained that "in the past the union has just recommended to us what management has offered us, but this year they put it to us to decide whether we wanted to push for more." This more militant attitude reflects drivers winning a series of disputes in the last year or so.

Given the substantial disruption, most drivers were confident the company would be forced to come back with an improved offer. But even if Leeds drivers win a substantial increase, a logical next step would be for First drivers across West Yorkshire to push for a higher, unified rate of pay across all sites.