Link to this page: https://www.socialistparty.org.uk/articles/23059 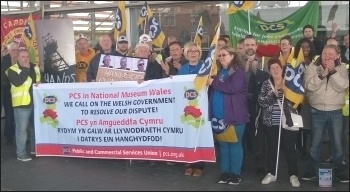 National Museum Wales workers are balloting on whether or not to accept an improved offer from the employers after seven weeks of strike action that have closed some sites and partly closed others.

Two years ago museum management announced they intended to cut weekend premium payments for museum workers - who are mainly in the PCS civil servants union.

With most museum workers expected to work weekends - some have only one Sunday off in three - this amounted to a big pay cut, especially for the lower paid workers.

Management, who were losing no money, offered them compensation equivalent to two years loss of pay, but it would still amount to a big pay cut.

After a series of one day strikes by PCS members, an all-out indefinite strike began on May Day weekend and the Welsh Labour government was forced to sit up and promise action.

New funds for National Museum Wales were found and eventually, after a lot of feet-dragging, management have come forward with an improved offer.

The offer does not save the weekend premium payments but improves the compensation to amounts equivalent to five years instead of two which can be taken as a lump sum or spread over five years with pension contributions.

There is also a reduction in weekend work and a 4% pay rise in 2017. The offer is a huge improvement on the original proposal, amounting to nearly £5,000 for each worker extra, but falls short of defending the weekend premium payments. Branch officers are also determined to keep up the fight to return the weekend premiums: "We see the deal not as the end of the war, but the end of the first battle" one of the officers said.

Geraint Parfitt one of the leaders of the strike will be addressing the National Shop Stewards Network (NSSN) conference on 2 July.