Link to this page: https://www.socialistparty.org.uk/articles/23257 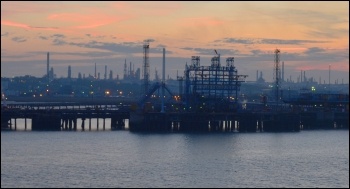 On 14 July workers from contractors NICO at the Fawley refinery, members of Unite, took strike action against the super-exploitation of migrant workers from Italy and Bulgaria, being paid £48 for a 10 hour shift, instead of £125. This is a flagrant breach of the national agreements for work at Fawley and other sites across the country.

Picketing at the main entrances strikers got excellent support from ESSO employees and other contractors on site. This is the first official strike at Fawley since the 1980s and shows how the mood against the 'race to the bottom' is growing.

"We may be nearing retirement but how could younger workers or our children come here and live off wages like that?", explained one of the strikers. Unite official Malcolm Bonnett said further strike action is planned for 27 July unless agreement is reached with the contractor. "We are here to say that all workers on this site should be paid the agreed rate for the job."

This version of this article was first posted on the Socialist Party website on 18 July 2016 and may vary slightly from the version subsequently printed in The Socialist.