Link to this page: https://www.socialistparty.org.uk/articles/23274

Editorial of the Socialist, issue 911 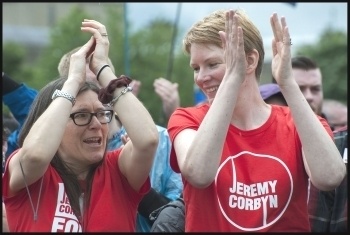 The next few months will decide the fate of the Labour Party. Although he claims to be 'as radical as Jeremy', the leadership challenger Owen Smith is in reality the candidate of all those with a vested interest in keeping the Labour Party a safe, New Labour-style version of the Tories.

The stakes couldn't be higher. Labour was set up 116 years ago by trade unionists, socialists, women suffrage campaigners, the working class co-operative movement, and others, as 'our party'.

But over the course of 20 years under the leadership of Blair, Brown and Miliband it was completely transformed into another party of big business and the 1% capitalist elite.

Even Tory prime ministers are now forced to speak of 'working class families struggling to get by' from the steps of Downing Street!

But because Jeremy Corbyn's victory offered the hope of change, a showdown with the capitalist establishment and their representatives within the Labour Party was inevitable.

And now, as the Socialist warned from the outset, the two-parties-in-one are in a desperate fight for control of the Labour Party brand.

The immediate task is to mobilise for Jeremy Corbyn's re-election. But also to organise to ensure that this time victory is consolidated by remaking Labour as a party that is working class and socialist, that really can be the voice of the 99%.

Labour at the crossroads

The Labour Party right-wing were never going to accept Jeremy Corbyn's leadership. Standing behind them are the capitalist establishment, the 1% elite, who have benefitted enormously from the transformation of Labour into Tony Blair's New Labour and the domination of political debate by pro-market ideas which that allowed.

It was not for nothing that the former Tory deputy prime minister Geoffrey Howe said of Margaret Thatcher that "her real triumph was to have transformed not just one party but two", with New Labour's embrace of capitalism.

While for example, average household incomes have only just returned to the levels at the start of the 'great recession' in 2008, the richest 1,000 people in Britain have more than doubled their wealth to £547 billion in the same period. The New Labour era was good for the elite.

The Labour right have shown how ruthless they are prepared to be to defend the interests of their establishment backers. Only the protests of thousands of Labour members and trade unionists secured a narrow majority on the party's national executive committee (NEC) to stop Jeremy being effectively excluded from the ballot paper.

But this attempted coup having failed, the right went on to plan B and limited the franchise compared to last summer's election, after Jeremy and other supporters had literally 'left the room'.

Also, for the first time since world war two, all regular party meetings have been closed down, removing the chance for ordinary party members to hold anti-Corbyn MPs and councillors to account.

Local parties should defy these edicts and continue meeting, or #Keep Corbyn meetings should be organised independently, including by trade union branches - and involving Corbyn supporters inside and outside the Labour Party.

After all, the dictatorial rule-or-ruin approach of the Labour apparatus in this battle gives a glimpse of the type of regime that will operate if Owen Smith were to win.

The idea that the social movement developing around Jeremy Corbyn could conduct an effective struggle within the confines of the Labour Party in the event that he is unseated from the leadership is utopian.

By the same token, it is clear that if Jeremy Corbyn is re-elected this time his victory must be properly consolidated. This means taking on the main bases of establishment Labour, in the Parliamentary Labour Party (PLP), the national party apparatus, and locally, the big majority of Labour's 7,000 councillors.

Challenging the latter will be vital to show in practice what an anti-austerity party really is, in contrast to the actions of the Labour right.

It does not mean a party voting for cuts! The fact is that Labour councils this year will be sacking three times the number of workers who are losing their jobs from the collapse of BHS, denounced by MPs as 'the unacceptable face of capitalism'.

If Jeremy Corbyn is re-elected he must organise for Labour councils to defy the Tories, including refusing to implement the new Housing and Planning Act, with local parties pressing councillors who refuse to fight to resign. The situation where council Labour groups and not the members decide council policy must be reversed.

The national structures of the Labour Party would also need to be opened out and democratised. To mobilise the maximum possible support, there should be a return to the founding structures of the Labour Party which involved separate socialist political parties coalescing with the trade unions and social movements like women's suffrage campaigners and the co-operative movement.

That federal approach applied to today would mean allowing political parties like the Socialist Party and others involved in the Trade Unionist and Socialist Coalition (TUSC), and anti-austerity Greens, to affiliate to Labour as the Co-op Party still does.

While mandatory re-selection would allow local parties to replace their MPs at the next general election, more decisive action would need to be taken before then to bring the parliamentary party into line.

MPs should have the Labour whip only if they agree to accept the renewed mandate for Corbyn and his anti-austerity, anti-war policies.

It is necessary to take on the forces in Labour defending the capitalist establishment, not seek 'unity' around their agenda.

Their attempted coup has shown that if there was a Corbyn-led Labour government they would play a similar role to those parliamentarians who joined Syriza as it overtook Pasok, the Greek equivalents of New Labour, but who were then to the fore in pushing for it to capitulate before the interests of capitalism.

A party of struggle with fewer MPs but a fighting socialist programme, would have a bigger impact in defence of the working class than a party with a couple of hundred MPs but which accepts the policies demanded by capitalism.

Winning new support it could regain the seats that may be temporarily held by anti-Corbyn MPs and go on to win a general election.

The right-wing have moved against Jeremy Corbyn and the most important question now is how the social movement that has begun to mobilise in his defence can be organised for the battles to come.

This version of this article was first posted on the Socialist Party website on 26 July 2016 and may vary slightly from the version subsequently printed in The Socialist.