Link to this page: https://www.socialistparty.org.uk/articles/23295 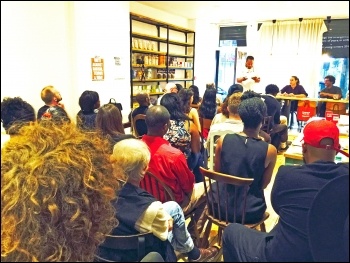 Over 60 people, mostly from the local black community, squeezed into a public meeting on 27 July to support and discuss the Black Lives Matter movement in the United States. The leading guest speaker was Ryan Watson, an activist in Black Lives Matter in Chicago, who is also a member of Socialist Alternative - co-thinkers of the England and Wales Socialist Party. 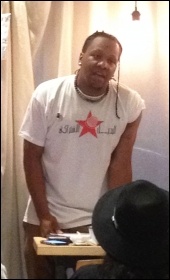 Ryan drew attention to the shocking fact that three people are shot dead every day on average by the US police, including many racist killings of black people in Chicago, Cleveland, Ferguson and beyond.

Large protest demonstrations have been organised by the Black Lives Matter movement, calling for an end to this appalling death toll and for those responsible to be brought to justice.

"We need millions in the street internationally saying that we won't take another police officer taking paid leave and then going back to work at the expense of a black or brown youth", said Ryan.

He graphically portrayed the discrimination and poverty faced by black and Hispanic working class people across the US, who make up over half the massive 2.3 million prison population - "even more than in the days of slavery", he commented.

He added that money is being poured into private sector prisons while young black people are denied education because they can't afford it.

Ryan also outlined the struggles involving all sections of the working class that have taken place across the US, from the Occupy movement in 2011 and the tremendous Wisconsin struggle for workers' rights that same year, to the more recent struggles against student debt, environmental destruction, and for a $15 an hour minimum wage. 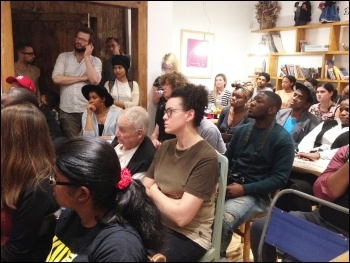 He denounced the fact that "the system - capitalism - is not benefitting the 99% of us" and that inequality is worse than ever: "62 people in the world have the same wealth as the poorest half of the world's population".

The solution, he urged, has to be through building support for socialist ideas, as his party Socialist Alternative is successfully doing, including in Seattle where it achieved the election of the first socialist councillor there - Kshama Sawant - for 100 years. 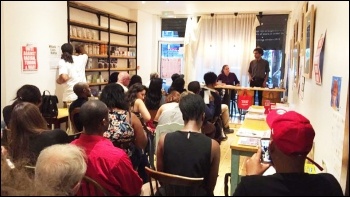 Hugo spoke of the racism and police brutality regularly suffered by Black and Asian people in Britain, and highlighted the case of 21-year-old Colin Roach who died in 1983 from a gunshot wound inside Stoke Newington police station, close to where our meeting was taking place.

He called on the meeting participants to get involved in a 'black lives matter' group in Hackney that can initiate and support campaigns and protests in the coming period. 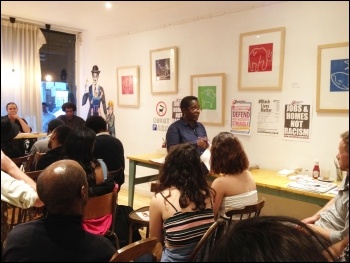 In the lively discussion that followed the platform speakers, Hugo's call met with plenty of interest. A number of contributors commented that an organised approach is needed so that guidance can be given on how people can be involved in building a force against racism, police harassment and brutality, and austerity.

This is "your meeting" had said chairperson Claire Laker-Mansfield to the audience at the start of the discussion. One of the contributors showed appreciation of that when she said: "I've never been to an event like this before, where you're able to express yourself".

Three young women from Holland commented afterwards that it was the highlight of their holiday.

The meeting was organised by Hackney and Islington Socialist Party with just four days of campaigning. The night's success could be measured by the number of discussions continuing in the room and on the street outside for over 40 minutes after the meeting ended.

This version of this article was first posted on the Socialist Party website on 28 July 2016 and may vary slightly from the version subsequently printed in The Socialist.