Link to this page: https://www.socialistparty.org.uk/articles/23305 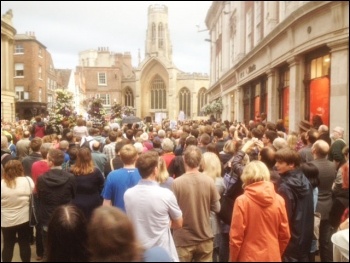 There was a large rally in St Helen's Square, York on Friday evening, 29th July. Jeremy Corbyn was greeted by the crowd of about 1,000 people with enthusiasm and spoke confidently and fluently for about 45 minutes.

He should be congratulated for his approach of holding public meetings in public spaces and although there were a few negative heckles made by passing shoppers, these only served to strengthen the mood of support in the crowd.

He addressed a wide range of subjects, including: the war in Iraq, the arts, appropriate use of social messaging, housing and last winter's floods. He expressed the view that austerity is not necessary and that there should be a mass programme of council house building as well as control of prices in the private rented sector - his most concrete proposal.

He linked this to the ideas behind the founding of the Labour Party and the appalling housing conditions and high rents at the time. He didn't mention Trident or how he is planning to fight the attacks from the pro-capitalist right in the Labour Party in any detail.

While the points in his speech were very welcome, it lacked specifics and this was commented on by some members of the crowd who had hoped for something more programmatic.

We held a Socialist Party stall which was well received, with lots of copies of the Socialist bought.