Letters to the editors 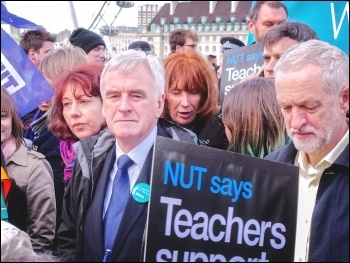 I have been moved to write this letter after witnessing yet another vile and rabid attack against Jeremy Corbyn supporters.

The situation concerning the expulsion of six Militant supporters from Blackburn Labour Party in 1984 has been covered in previous issues of the Socialist newspaper.

However, these have featured predominantly the bureaucratic manoeuvres used against us. I wish to focus now on just some of the abuse and lies also deployed to discredit us by right-wing and even some soft-left Labour Party members.

We were falsely accused of theft and illegal activities, which two national newspapers and Jack Straw MP were forced later to retract. I was accused of violence, which again Jack Straw was forced to retract, ironically following an incident that had me being threatened by the party chairman with an axe!

I was also threatened to be shot in both kneecaps, my flat had a brick thrown through its window, and was later burgled of all my possessions.

I was victim in my Labour Party ward of a lying whispering campaign to get people out to remove me from my local party executive positions. These lies included me being called a paedophile - I was an unemployed school teacher.

We were accused of extramarital affairs, illegal drug taking, and the local paper published inflammatory and distorted comments about us. Those Militant supporters lucky enough to be in work were spoken to by their bosses and made to feel their livelihoods were under threat. Worse than that, one young socialist attempted suicide due to all the pressure he was put under in this witch-hunt.

I could continue, but would conclude by saying this to those both inside and outside the Labour Party supporting Jeremy Corbyn: hold firmly to your socialist principles. Work in solidarity with others inside the labour movement - but be prepared for anything!

Clearly the right-wing careerists in the Labour Party can see the writing on the wall re their futures. With the prospect of reselection - a threat to their positions of power, prestige and income - and seeing radicalised new layers moving into action - these careerists will stop at nothing to tarnish and smear their opponents.

Solidarity and courage are essential!

Now that Eagle had dropped out, Owen Smith is the only challenger to Jeremy Corbyn in the Labour leadership contest.

It's interesting to see that three quarters of MPs elected in by-elections since Corbyn became leader have nominated Owen Smith for Labour leader. They are Rosena Allin-Khan, Jim McMahon and Chris Elmore. The other, Gill Furniss, voted against Corbyn in the Parliamentary Labour Party (PLP) no-confidence vote.

While Harry Harpham - who Furniss replaced after his death - had backed Andy Burnham, all of the MPs the others replaced backed Corbyn in 2015. Of course Sadiq Khan, for example, didn't vote for Corbyn in the ensuing election.

This shows just how vital the question of the rank and file having control over the selection of MPs is.

Owen Jones has demonstrated once again how little understanding he has of the social and political forces currently at work by calling for Sanders supporters to rally behind Hilary Clinton. This is in spite of the fact that the rise of Trump is directly tied to decades of successive neoliberal regimes, of which Clinton is widely seen as one of the main representatives.

Society, particularly in the US, is polarising right now, and this provides probably the best opportunity in history to break through the two-party system. Since Sanders has capitulated to the demands of the (un)Democratic Party, this means that the best course of action is now to provide critical support for Jill Stein from the Greens.

This is the position of Socialist Alternative - the Socialist Party's co-thinkers in the US.

People are looking for answers, and if the left fails to provide them then the right will fill the vacuum.

I just read an article on Owen Smith, about an interview he gave. This part upset me: "I'm glad you think I'm normal. I am normal. You know, I grew up in a normal household. I have a wife and three children. My wife is a primary school teacher."

These remarks are not only insulting to those married and unmarried couples without children, but also single parents, gay couples and single people - and also those trying for children and those waiting to adopt children.

My wife is also a teacher, and we were trying for children for years. We then went down the IVF route which was emotionally and financially stressful. We failed, and now we are waiting to adopt, having passed all the tests.

How can this bloke be putting himself forward as a candidate to be leader of the Labour Party when he is so out of touch with modern society? I would expect those backward remarks from a Tory. How can he go on about an 'equal' and 'just' society when he comes out with remarks like that?

After the EU referendum, reports from around the country pointed to a worrying spike in racist incidents. BBC London news (4 July) gave the figure of an average of 67 reported racist offenses in London per day, up 20% compared to before 23 June.

Some left Remainers point to this to attack the correctness of the left Leave campaign. In doing so they unfortunately highlight their refusal to learn the necessary lessons, not only of the rise of Ukip, but also how to combat racism generally.

By succumbing to the creed of lesser evilism, and declining to take an independent class position, Corbyn, O'Grady et al failed to win over rightly sceptical workers, and left a vacuum which Ukip has been able to exploit.

But the pessimists ought not to despair. Rather they need to be spurred into action. Opportunities are presenting themselves again, and the labour movement is capable of undermining racism - provided it breaks with the Blairites and takes up the fight for jobs, homes and services for all.

In 1908, Ben Tillett - in his pamphlet 'Is the Parliamentary Labour Party a failure?' - put: "The House of Commons and the country, which respected and feared the Labour Party, are now fast approaching a condition of contempt towards its parliamentary representatives. The lion has no teeth or claws, and is losing his growl too."

The latest edition of the National Express company magazine included an article congratulating a young woman from Southampton who had successfully completed her work experience and had been awarded a zero-hour contract.

It doesn't matter how hard you work, you still can't be guaranteed a proper job with regular hours.

Unions should be campaigning for Britain to follow the example of New Zealand and ban zero-hour contracts. They also need to establish control over hiring and firing, and make sure flexible working is there for those who want it, but on workers' terms, not the bosses' terms.

The attacks on Jeremy Corbyn seem to be getting more and more ridiculous. Only the other day, ITV News, on the subject of deselection of certain MPs, said that JC was like "a nasty boss sacking his workers."

Now if they want to go down that road, it is an implied term in any contract of employment that the mutual trust and confidence between employer and employee should not be damaged or destroyed.

Well, the Blairites are certainly guilty of this, so by ITV's logic it becomes the duty of JC to sack the lot of them.