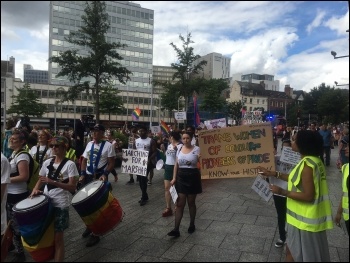 This year's Pride march in Nottingham on 30 July was a far cry from the corporate-sponsored 'respectability politics' of integration into the capitalist establishment. The march, some 5,000 strong, was led by Black Lives Matter and Notts QTIPOC (Queer, Trans and Intersex People of Colour), with the foremost banner dedicated to Marsha P Johnson, an African-American drag queen activist who was at the forefront of the Stonewall uprising against anti-LGBT police brutality in 1969.

Other banners celebrated transgender women as pioneers of Pride, and denounced the inhumane treatment of transgender prisoners and queer refugees. As the march arrived in Hockley, a minute's silence was observed for the victims of the Orlando LGBT massacre.

The atmosphere was electric as political slogans gave voice to anger that in previous years had been drowned out by the whistle-sellers' wares.