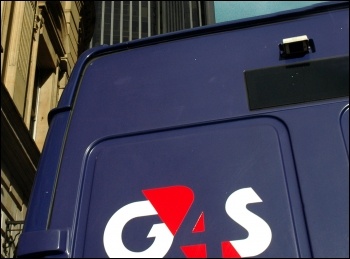 The Tories have handed the contract for the government's Equality Advisory and Support Service discrimination helpline to notorious privatisers G4S. Sue Powell takes a look at the outsourcers' record...

The Equality Advisory and Support Service helps people facing human rights issues or dis-crimination on the grounds of disability, race, gender and other forms of discrimination.

For example, supporting people denied housing or made redundant due to race, sexual orientation, age or disability. We seek a trustworthy, supportive and understanding manager to run our helpline at a time when hate crime is increasing.

And now, the successful applicant's CV...

Cashed in on Canada's asylum crackdown.

Investigated by the UK's Serious Fraud Office and criticised in parliament for charging for electronic tags on released and deceased offenders.

Found to use disciplinary techniques in our prisons including tipping a pregnant woman's wheelchair while holding her feet.

Our police control room made bogus 999 calls to hit targets.

Our patient transport service in Kent left a dialysis patient stranded for hours.

Referees - UK government (estimated £4 billion of contracts by 2012), other governments looking to privatise anything all over the planet