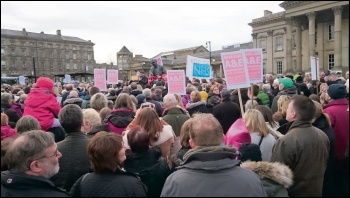 The NHS is about to undergo further major cuts and closures, through the government's misnamed 'Sustainability and Transformation Plan'. NHS England alone could face a £20 billion funding gap.

Simon Stevens, NHS England's chief executive, pledged in April 2014 to maintain local hospitals. He feared a vengeful public coming out to fight for their NHS.

Yet that is exactly what will happen now as a result of the 44 regional Sustainability and Transformation Plans. Changes in London, Leicestershire and the West Midlands - including entire hospitals being downgraded or closed - could result in nationwide protests.

NHS bosses say the plans are necessary for the sake of better care, modernisation and financial balance. But an angry, disbelieving public will fight tooth and nail against the loss of vital local services.

Here in Yorkshire, workers and the community continue to resist the proposed Huddersfield Royal Infirmary (HRI) A&E closure through the 'Hands Off HRI' campaign.

On 4 September we will march, followed by an afternoon of bands, stalls, entertainment and speakers. Almost £20,000 has been raised by local people to launch a legal challenge against the closure, backed by several large demonstrations. Two coaches have so far been booked for a visit to the Department of Health and Downing Street on 10 October.

This fight of ours has been fought and won in other parts of the country, such as Lewisham in south London. More areas are starting to mobilise to defend their own services. We are starting to link up with campaigns from all over the country, some of which are joining us in London in October.

The time is now right to unite all these struggles into a huge national campaign to defend the NHS.

The government can be defeated on this issue, but it's urgent that the trade unions take up the struggle now! The unions must build for coordinated, escalating strikes, and name the day for a national demonstration to save the NHS.