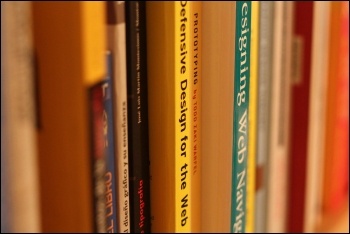 A Unite the Union member

The council had decided to force plans through despite massive public opposition. Petitions - and even the council's own biased consultation exercise - returned a massive majority against.

General union Unite, which organises Bromley library workers, led sustained strike action. This was alongside a huge publicity campaign to explain exactly why the union opposes volunteer libraries. The attack was also a main factor in two of the biggest marches through the borough in decades.

We have no problem with volunteering in principle - but not when it replaces public services, and not at the cost of paid jobs. The experience from volunteer libraries all over the country is slow death.

Organisations such as charities are sometimes more interested in using the space for themselves rather than functioning as a library. And the loss of staff professionalism is often there for all to see.

Tactically, we focussed on 'Bromley Community Links' - the organisation the council had chosen to put the volunteer plan together. We leafletted outside its HQ, targeted its events, and contacted affiliated groups and trustees.

Our message was clear. If the organisation assisted in destroying libraries, Unite would escalate the campaign against it. Last week Bromley Council announced Bromley Community Links had pulled out.

This is a magnificent victory against a vicious Tory council. It is hugely significant that this was trade union-led, rather than relying solely on a community campaign. Clearly there is space and a need for both - but this emphasises the role of unions in winning.

The council will now try to hand libraries to a private employer. But the victory against volunteer status is a huge boost. It's 1-0 to Unite - now we need to beat privatisation.