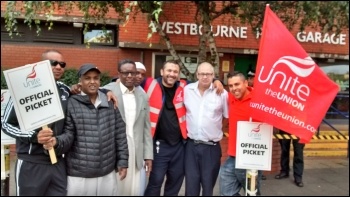 Tower Transit bus workers took further strike action on 12 September over the imposition of new rotas that will see them lose all their previous pay rise. The drivers at Westbourne Park garage said that very few buses were on the road. While I was at the garage for an hour and a half no buses came in or out of the garage and no buses drove past.

The owner of Tower Transit is determined to take on the union and said that drivers could go out on strike for a month straight. But drivers are even more determined to win this battle.

Their two key demands are that they want rotas back to what they were before the pay rise and that all future negotiations involve Lea Interchange and Westbourne Park garages together to cut across management's attempts to divide the drivers.

The drivers are buoyed by all the support they are getting, several people stopping to say to the drivers that they've got to keep fighting. People stopped to offer the drivers coffee, tea and food. The owner of a bed making company opposite the garage came over to offer his support.

At the Lea interchange strikers spoke about a number of issues including getting rid of check-off and the company having said they are kicking the union out of their office in revenge for taking industrial action.

If the management persist in their implementation of these rotas the drivers will be taking further action on 19 September.