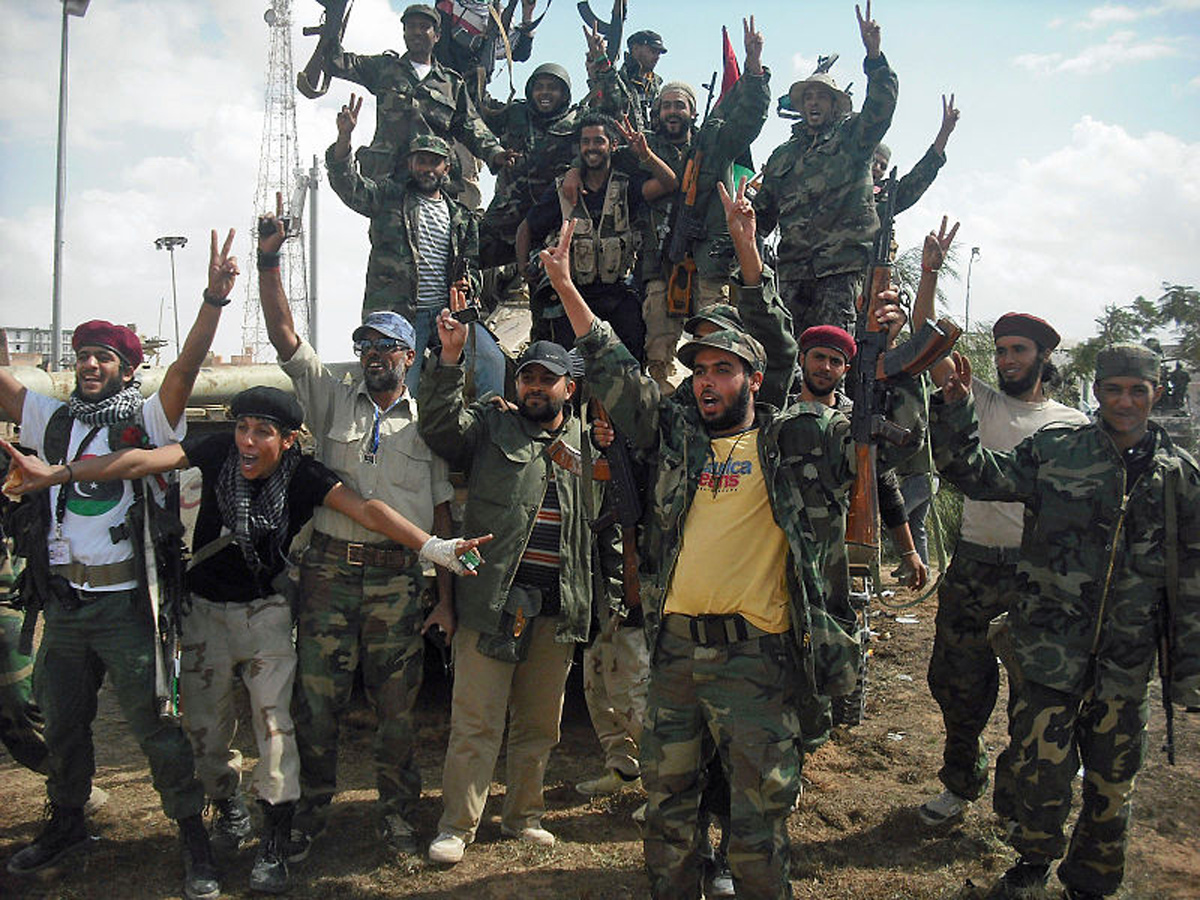 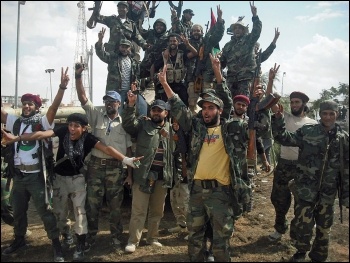 Some of the rebels fighting Gaddafi in 2011, photo by Magharebia (Creative Commons)   (Click to enlarge: opens in new window)

By Robert Bechert, Committee for a Workers’ International

There was nothing for the Libyan people to celebrate in the damning report by a Commons parliamentary committee into the British government’s role in the West’s contribution to overthrowing the Gaddafi regime in 2011 – an intervention which helped lead to the almost complete collapse of their country and the derailment of the revolution that had begun there.

Partly a settling of internal Tory party scores, this parliamentary inquiry sort to make ex-prime minister David Cameron the scapegoat for what became an utterly disastrous and failed military intervention for imperialism, let alone the Libyan people. In this they were not the first, Obama has also publically criticised Cameron and his ally in this adventure, former French president Sarkozy, for what has happened. But it should not be forgotten that in March 2011 the British House of Commons voted by 557 to 13 in favour of military action. Jeremy Corbyn was one of the tiny handful, mainly left wingers, who voted against.

The inquiry concluded that the result has been “political and economic collapse, inter-militia and inter-tribal warfare, humanitarian and migrant crises, widespread human rights violations, the spread of Gaddafi regime weapons and the growth of Isis in North Africa”.

The reason for this apparent contradiction between its approach to Libya and Yemen is that the starting points for such capitalist politicians are the interests of British capitalism and, to a slightly lesser extent, those of imperialism in general. Thus for them the Saudi regime must be defended because it buys billions of pounds worth of weapons from Britain and also is an important prop for imperialism in the Middle East. On the other hand their criticism of the Libyan action is because this British and French adventure resulted in a substantial further destabilisation of an area strategically important for imperialism and also the massive increase of refugees and migrants attempting to cross the Mediterranean after the European Union lost its Libyan border guard.

In part this committee’s inquiry has confirmed the warnings against any support for this type of intervention that the Socialist Party and the CWI gave throughout 2011. Jeremy Corbyn also opposed the bombing campaign unlike groups like the Alliance for Workers’ Liberty (AWL) in Britain who were loudly shouting that this military action had to be supported in order to ‘defend’ the Libyan people.

But there is a fundamental, essential difference, between this parliamentary committee’s criticisms and the Socialist Party and the CWI’s opposition to the military intervention. Our stand was based upon defending the interests of working people around the world while capitalist politicians protect the interests of their ruling classes.

Thus, as socialists, we did not just warmly welcome the revolutionary “Arab Spring” of 2011 but we also argued that in order for the working masses and poor in north Africa and the Middle East to achieve their democratic and social aims it was not only necessary to overthrow tyrants, but also to break with capitalism.

Obviously this was something which imperialist governments like the British and French wanted to prevent and, alongside domestic politic calculations, was a reason why they sought to intervene in Libya in the hope of restraining the revolution there, install a pro-western government and establish a position from which they could intervene in the rest of the region.

Warning against hopes in the West

From the beginning of the revolution in Libya we warned those Libyans striving for genuine freedom not to have any hopes or illusions in western intervention. Instead we pointed to the Tunisian and Egyptian examples earlier that year of mass movements overthrowing repressive regimes which Gaddafi, the then Libyan ruler, had supported. In part Gaddafi’s support for other autocrats flowed from the accommodation he had made with imperialism and the fear that the Libyan people would demand democratic rights, real action against corruption and democratic control of Libya’s gas and oil wealth.

Gaddafi immediately started issuing blood curdling threats against the early centres of the revolution in the east but these areas, particularly Benghazi, could have been protected by mass, popular defence. But at the same time we warned that unless an independent movement of workers, poor and youth was built the revolution would not succeed in fundamentally changing the country.

The absence of such a movement opened the door to grave dangers. At the beginning of the revolution we explained that the raising of the old monarchy’s flag in the eastern city of Benghazi risked dividing the country, which had been first formed in the 1930s and then reformed in the late 1940s, as the old king had come from the east where a minority of the population lived. While a Libyan national consciousness had then developed we warned that without the building of an independent working peoples’ movement there was the danger of the revival and deepening of Libya’s regional, tribal and clan divisions, along with hostility to the Amazigh and black Libyan non-Arab minorities. Additionally the fact that, before 2011, up to 2.5 million of Libya’s 6.5 million population were migrants posed the danger of hostility both to migrants from other Arab countries and, exploiting old prejudices, against Sub-Saharan Africans.

In Britain, one of the most strident left supporters of this British and French intervention was the AWL grouping who argued that it could not be opposed because, in March 2011, this was the only way to prevent Gaddafi crushing the Benghazi uprising in an “extremely bloody” counter-revolution. While saying that they “did not call for or support NATO intervention in Libya …it does not follow that opposing this specific NATO action made sense” (“The Libyan revolution: issues for Marxists”, September 7, 2011). But in reality for the AWL it was not just the specific question of how to stop Gaddafi’s forces advancing on Benghazi in late March 2011. Despite saying there should be “no trust in the NATO powers” in reality they supported the continued NATO action in Libya in the fighting that continued in the months afterwards. Indeed they wanted NATO to do more which was why, after Gaddafi lost Tripoli at the end of August, they complained about “the general laziness of NATO in prosecuting its campaign” (“Libya: the new struggle after victory”, September 7, 2011).

While claiming to be “practical”, and sometimes pointing to genuine issues like the absence of workers’ organisations in Libya, the AWL did not argue for an independent political strategy for the workers and poor in Libya. Instead it argued for a capitalist based “democratic, secular republic”, even complaining that NATO “had frustrated” the ‘Transitional National Council’ which was then unsuccessfully trying to form a pro-capitalist Libyan government.

Shortly after Gaddafi’s killing we wrote that “now, more than ever, the creation of independent, democratic workers’ organisations, including a workers’ party, are vital, if working people, the oppressed and youth are to achieve a real revolutionary transformation of the country and thwart the imperialists’ plans, end dictatorship and transform the lives of the mass of the people. Without this other forces will step into the gap.”

This is unfortunately what has happened. Libya is now in a state of near disintegration. But this does not mean that a revival of a genuine mass movement is ruled out that can unite working people in struggle. However, for lasting success, would need to develop a programme that defends all democratic rights, is against oppression, can organise democratic self-defence, involving minorities and migrant workers, against sectarian attacks.

Libya is still a potentially rich country, but the question is who owns and controls its assets. The Libyan working people have to take the issue into their own hands. A genuine mass movement would oppose the privatisation of Libya’s assets, oppose all foreign military intervention and strive for a government of representatives of the workers and poor, based upon democratic structures in the workplaces and communities, which would use Libya’s resources for its population. Without this the danger is that Libya remains a playground for warlords, sectarian fanatics and looters, Libyan and foreign.