Editorial of the Socialist, issue 918 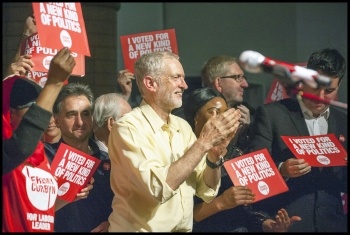 Corbyn has seen off the attempted coup - but only refounding Labour on democratic, inclusive lines will ultimately defeat the right   (Click to enlarge)

"The war continues." So declared one ex-shadow cabinet minister to the Sunday Times (25 September).

The attempted coup against Jeremy Corbyn by 172 Labour MPs has ended in abject failure, with his mandate strengthened. In the aftermath of the leadership contest many Corbyn supporters will have hoped that it would now be possible to unify the Labour Party around a clear anti-austerity programme in a battle to defeat the Tories. Within hours however it was clear that, as we warned, there is no possibility of the right accepting the democratic will of Labour Party members. They are reeling under the impact of a crushing defeat, with no clear idea of how to launch the next stage of their 'get Corbyn' campaign, but the one thing they are united on is its necessity.

Around the country a smattering of Blairites have torn up their Labour Party cards, including the leader of Portsmouth council Labour group, and businessman and SDP founder Lord Mitchell. The majority have, however, made clear that at this stage they intend to stay and try to 'reclaim' their party for the capitalist class. There are rumours that a few will rejoin the shadow cabinet but most are indicating that they will only do so if the Parliamentary Labour Party (PLP) gets to choose its membership.

Disgracefully, Dave Prentis, general secretary of Unison (which voted to support Corbyn in the leadership contest) has suggested that this is the way to heal the rifts in the Labour Party. But such a measure would not be about healing rifts but handing victory to Tom Watson's rumoured 'Project Anaconda' - to isolate and then crush Corbyn.

That they have failed to do so to date is only because of the hundreds of thousands of people who have rallied to the defence of Jeremy's leadership and anti-austerity platform, resulting in Labour having the biggest membership of any party in Western Europe. However, Labour remains two parties in one: the old pro-capitalist, establishment party and the new anti-austerity party in formation.

In essence the struggle taking place in the Labour Party is about in which classes' interests it is going to act - the working class majority in society and the middle class with no hope for the future, or the capitalist 1%? The pro-capitalist wing of Labour dominates the PLP and Labour councils. It still controls much of the Labour Party machine, successfully preventing around 150,000 voting in the leadership election and banning regular local Labour Party meetings from taking place during the leadership contest.

The expulsions and exclusions look set to continue. The list of words that Labour Party members are banned from using even includes 'Blairite'! The right are also fighting tooth and nail to establish a majority on Labour's National Executive Committee.

To respond to these savage attacks by attempting to pacify the right is a major mistake. This was the approach taken after Jeremy's first leadership victory and it ended in the coup. A second attempt could only end the same way. The leaked 'Project Anaconda' email put it bluntly saying: "Every concession JC makes will be used to tighten the grip." No more concessions should be made. Nor should the current, highly-undemocratic, Labour Party rules and structures be accepted. Labour should be rebuilt as an open and democratic anti-austerity party.

Right-wing MPs are in a frenzy because Jeremy only said that the "vast majority of MPs will have no problem whatsoever" in keeping their seats in the selection contests that could take place as a result of boundary changes. Nothing but a promise that the seat of every single MP was safe would satisfy them.

But every MP and councillor should face mandatory reselection. This democratic procedure was hard fought for by the left in the past, including Corbyn and McDonnell, only to be abolished as part of the Blairites consolidating their grip on the party. There is no doubt that this made it easier for Labour MPs to vote for tuition fees, privatisation and war, and in some cases to fiddle their expenses, without any fear of being removed and replaced by their local membership.

The reintroduction of mandatory reselection would be an important step forward, but is not sufficient alone. Jeremy has a huge mandate for the anti-austerity programme on which he was elected. He should now insist that all Labour MPs agree to support his leadership and vote for his programme in parliament. It can no longer be the case that Labour MPs can vote for benefit cuts or privatisation of hospitals without consequence. MPs who do so should be excluded from the PLP.

In the short term this would undoubtedly leave Labour with fewer MPs but a PLP which was united in opposing austerity and supporting workers in struggle would be far more effective than the current situation, where a big section of the PLP are doing their best to 'get Corbyn' even at the cost of losing a general election.

And far from being unpopular, such an anti-austerity Labour Party could quickly make electoral gains. Unfortunately, the attempts to compromise with the right have muffled Corbyn's anti-austerity programme over the last year. But many of his policies - a £10 an hour minimum wage, free education, mass council house building, renationalising the railways - are enormously popular and now need to be shouted from the rooftops. Unfortunately the Labour Party conferences shows the danger that, once again, the anti-austerity message is not heard because of a desire to compromise with the right.

The question of local councils is an important aspect of this. Millions of working class people do not yet recognise Labour as an anti-austerity force because they live in Labour-led local authorities, which are implementing savage austerity. Central government funding of local authorities has been cut by 40% since 2010 and Labour local authorities are dutifully wielding the axe, resulting in 670,000 job losses and destruction of vital local services.

Pressure is mounting. This year Unite and GMB conferences supported a call for councils to refuse to implement any further cuts. In a vain attempt to protect Labour councillors from the anger of workers whose jobs and services are being destroyed (like the 20% of Manchester firefighters facing the sack from a Labour-controlled fire authority) a rule change is being put to Labour Party conference barring Labour councillors from voting against Labour cuts budgets or from setting so-called 'illegal' no-cuts budgets.

The Labour leadership should urgently make clear their opposition to it. It is in part a red herring but Labour conference should be passing a motion demanding Labour councils refuse to implement cuts, not trying to prevent them from doing so. The 58 Labour-led councils that had elections this year alone have £4.5 billion in general reserves. If these were pooled every Labour council in the country would be able to implement legal no-cuts budgets. This could be used to launch a struggle against Tory austerity which could defeat the government.

In Liverpool, where the Labour Party conference is taking place, in the 1980s the council was able to successfully take on Thatcher and win an extra £60 million in funding for the council. In the course of doing so they were decreed to have broken Tory laws, but the results - building council houses, nurseries, leisure centres and more - stand in bricks and mortar. Labour Party conference delegates should be taken on a tour to visit them.

And far from being electorally unpopular, the swing to Labour in Liverpool in the 1987 general election, had it been repeated on a national scale, would have led to a landslide victory for Labour instead of the defeat it was led to by witch-hunter Neil Kinnock.

It is urgent that a battle is launched to transform Labour into an anti-austerity party in word and deed. Alongside this a campaign should begin to democratise the party. This should include readmitting all those socialists that have been expelled and excluded.

The role of the trade unions - workers' organisations with over six million members - should be restored, on a democratic basis so that union delegates genuinely represent the views of their members. John Hannet, the right-wing general secretary of the Usdaw shop workers union, is backing the Blairites to the hilt. But he is not representing the views of many of his low-paid members, who would fully support a leadership fighting for a £10 an hour minimum wage.

The national structures of the Labour Party would also need to be opened out and democratised. The Socialist Party argues for a return to the founding structures of the Labour Party which involved separate socialist political parties coalescing with the trade unions and social movements like women's suffrage campaigners and the co-operative movement. That federal approach applied to today would mean allowing political parties that were prepared to sign up to a clear anti-austerity programme, including the Socialist Party, to affiliate to Labour as the Co-op Party still does.

The movement in support of Corbyn opens up a very important opportunity for working class people in Britain. It creates the possibility of a workers' party - standing for the 99% instead of the 1%, and able to attract all those workers and youth wanting to fight back against capitalism. It is urgent that Jeremy Corbyn's victory is consolidated and the opportunity grasped.