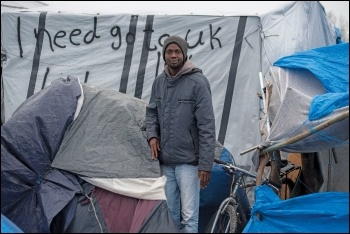 'The Jungle' camp in Calais, photo by Paul Mattsson   (Click to enlarge)

May voted to invade Iraq, and bomb Libya and Syria: all disastrous military interventions, which helped create the current refugee crisis in the Middle East.

Faced with the human consequences of the warmongering she supported, her 'solution' is to slam the doors shut. She insists refugees should have to stay in the first 'safe' country they come to - Greece, Italy, Turkey!

May then goes on to blame "unprecedented" numbers of economic migrants for undermining support for refugees' rights. Her comments will encourage more horrific racist attacks.

There has already been a rise in verbal and physical abuse, thanks to the anti-migrant propaganda pushed by both establishment campaigns - Farage's Leave and May's Remain - in the EU referendum.

Comments like May's always give those with prejudices more confidence to express them. The Socialist Party defends the right to asylum, and opposes the anti-migrant propaganda which leads to such attacks.

One of the biggest reasons people give for wanting migration cut is feeling their standard of living is under threat. More competition for housing, scarce public resources like GP appointments, increases in school numbers with no increase in resources.

But the cause of these problems is lack of investment in public services. Those that remain are bled dry by privatisation. Reducing migration won't help divert more resources for healthcare, for example, when we have a government bent on privatising the NHS and driving all junior doctors abroad!

Jeremy Corbyn was right on the Andrew Marr show to take up the issue of the undercutting of wages, which has fed anti-migrant feelings.

The solution to this is a trade union campaign against bosses forcing competing workers into a 'race to the bottom'.

Fight for equal pay and conditions at a rate all people can live on, migrant or not - and for an end to austerity.