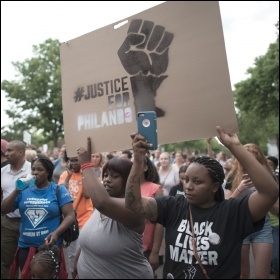 Socialist Students is fully engaged in the fight against racism, photo by Fibonacci Blue (Creative Commons)   (Click to enlarge)

Starting with Occupy Wall Street five years ago and moving through the Fight for $15, Black Lives Matter and Bernie Sanders movements, the scope of American politics is being changed. And at every turn, young people are at the forefront.

If you're 20 years old like me, you were 12 when the 'great recession' of 2008 happened. The worst economic recession since the depression 85 years ago, the 'great recession' rocked working and middle class families. My generation, in our formative political years, watched our parents get laid off. Families lost their homes and couldn't pay back debt and mortgages.

We are called "the generation of the overeducated barista" because the amount of good-paying jobs plummeted after the 2008 recession and many of us are stuck in low-wage jobs with no way out in sight.

Many of us placed hope in Barack Obama when he became president in 2008, only to see him campaign on the same promise of "hope and change" in 2012 after not delivering much of either in his first four years.

If we were old enough many of us even voted for him in 2012 despite being disappointed, because we sure as hell didn't want Mitt Romney the Republican.

Not much has changed under the first black president. Racism still runs rampant, we still have troops in the Middle East, catastrophic climate change is underway, and more and more wealth is being concentrated in the hands of a few rich capitalists, while the rest of us are figuring out how to pay off our student loans.

So it shouldn't be a surprise that in many places the Black Lives Matter movement has been led by young black women, or that the Fight for $15 was led mainly by young fast food workers, or that more young people voted for Bernie Sanders and his call for "a political revolution against the billionaire class" in the primaries than Hillary Clinton and Donald Trump combined!

From campaigns for fossil fuel divestment, to campaigns against sexual assault on campus, to the #MillionStudentMarch for free college last year, to Black Lives Matter on campuses, the student movement is growing stronger every day and student members of Socialist Alternative have been there every step of the way.

Last school year, student members of Socialist Alternative initiated and led the organising of the two massive #MillionStudentMarch national days of action against student debt and racism. We demanded tuition-free public college, cancellation of all student debt and a $15 minimum wage for all campus workers. In November 2015, we had over 15,000 students in the streets at 110 college campuses across the country.

It is time for all students and young people who want to fight for serious reforms - yet see that economic and social justice cannot be achieved without fundamental system change - to come together.

Therefore, student members of Socialist Alternative have officially launched Socialist Students, a nationwide initiative to help build the socialist movement in schools and on campuses across the country.

Socialist Students will hold regular meetings on campuses. We will have political discussions on all sorts of topics ranging from current events, to socialist history and theory, to black and LGBTQ liberation, the limits of reform under capitalism and most importantly how to put these into practice building the socialist movement on our campuses.

We intend to hold debates on campuses across the country with Democrats and Republicans as well as libertarians on who to support in the presidential election.

Socialist Students will argue the case for students to support the Green Party's Jill Stein in order to continue the political revolution against the billionaire class that Bernie Sanders started.

We want to explain to our fellow students why we do not see the corporate-controlled Democratic Party as a vehicle for left-wing change and why we think that continuing to support the 'lesser evil' year after year is a dead end.

We will also help organise anti-Trump protests and demonstrations but put forward to our fellow students that, despite what the corporate media may tell us, supporting Hillary Clinton and the Democrats is not the way to stop him!

The 'American dream' is supposed to guarantee that, as long as you work hard, each generation will have a higher standard of living than our parents. But our experience is telling us otherwise.

Instead we need a democratic socialist society, where the economy is democratically planned by the majority, where resources should be used to meet human need, not to satisfy the greed of a tiny minority.

We have launched Socialist Students to help spread these ideas to other students by building on campuses across the country.