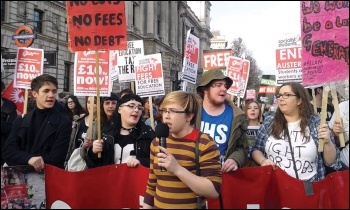 Campaigning in the new term at colleges and universities has generated renewed interest in Socialist Students. As the following brief reports show, many students who have signed up at freshers fairs have been exposed to socialist ideas through the Corbyn Labour leadership campaign, as well as being motivated to fight the government's austerity attacks.

Socialist Students held a stall at De Montfort University on activities day, with the aim of establishing a new society. However, not being an official society as yet, it was only a matter of minutes before the overzealous campus security asked us to relocate to across the road from the main event. Despite this we attracted plenty of attention with our 'Join the socialists!' sign.

We sold 14 Megaphone magazines, several copies of the Socialist, and 44 people signed up to join the society. We will be holding our first meeting on 'What next for Jeremy Corbyn?' and discussing plans for campaigning on campus.

Swansea Socialist Students had a fantastic freshers intervention this year, taking part in three days of stalls and meetings across both campuses.

It was remarked that we were the most dynamic and engaging political group by far. This paid off as we had a large number of sign ups throughout the week and two well attended meetings with fresh faces, excited to enter the struggle and fight back.

Goldsmiths - A message for the Blairites

Socialist Students is looking to set up a new society at Goldsmiths University in south London. We collected more than enough names on the first day of the fair.

We got the news of Corbyn's victory while on the freshers stall, and one of the student union officers jumped up to announce the win to a cheer. There was a combative mood among students we discussed with over the weekend. The most common message from students was for Labour MPs that refuse to support Corbyn - "there is a party for them. It's called the Conservatives"!

Our first meeting on 22 September was a general discussion about political developments post Brexit, especially the government's new attacks on students in the Higher Education bill. After this it was decided to do a 'free education' campaign stall.

Our successful first meeting will be followed by a meeting on 'Socialism in the 21st Century'.

Hertfordshire Socialist Students ran a successful freshers fair stall at the University of Hertfordshire, collecting many names of students hungry to learn about our campaign to scrap tuition fees and reinstate grants - campaigns popularised by the election of Jeremy Corbyn. Many students also signed up wanting to know what socialism is and how it can transform society.

We attended both the Headingley and City Campus freshers fairs and had a good level of interest. We were asked a lot of questions. Some students just wanted a basic definition of socialism, some wanted to talk about current political topics such as Corbyn or the US elections, and others were already active and just wanted to sign straight up.

There was definitely a lot of interest around Jeremy Corbyn, the Labour leadership election, and issues such as tuition fees.

I spoke to a number of students who had developed an interest in politics after seeing Jeremy Corbyn on TV and social media.

We were back at the loud and colourful UAL freshers fair this year. Socialist Students was set up last year and news of this had obviously spread; people had seen or heard about us and wanted to sign up.

The fair was on the day after Tom Watson's speech attacking Corbyn and praising Blair and Brown's 'achievements' at Labour Party conference. This angered many students who we discussed with. None of them could understand why anyone would be proud of Blair and his policies of waging wars and introducing tuition fees.

The left student union is building for the 19 November joint demo of the National Union of Students and University and College lecturers Union.

Labour Students and Momentum campaigners were keen to organise a joint event to discuss the developments in the Labour Party and the idea of deselecting right-wing MPs who oppose Corbyn and the wishes of ordinary party members.

Seven Socialist Party members in Bradford were out campaigning among new college and university students about scrapping tuition fees and fighting the Tories. As a result, several young people were interested in attending our next branch meeting and gave us their contact details.