Liverpool FC and the fight against racism 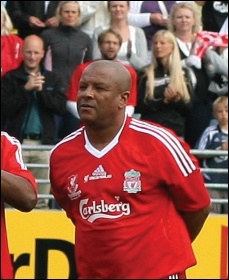 Liverpool-born black footballer Howard Gayle wore the red shirt of Liverpool FC during the 1980s. I have been a Liverpool supporter for over 50 years, and of course, for me, players like John Barnes and Howard Gayle were sporting heroes.

Very rarely during that period would you see a black face on the Kop, due to the racial divide in the city during the 1960s, 70s, and early 80s.

This segregation started to come to an end during the period when the 47 Labour councillors led by Militant, forerunner of the Socialist Party, controlled the council. They united many sections of the Liverpool community against the Thatcher government's attacks on the working class.

Howard Gayle very recently refused to accept an honour from this Tory government, because of his principles as a black person with knowledge of the history of the Tories and the rotten honours system.

I have, in the past, shared a 'Show Racism the Red Card' platform with both Howard and John. They have worked hard to raise the anti-racism campaign within both the football and local communities. Sadly, very few star footballers, black or white, have been prepared to put their principles before their celebrity status.

It is now 2016, and at Anfield you will see Liverpool fans from various communities and countries singing "You'll never walk alone" in unison. Quite often, a current Liverpool team could have at least six black players on the field cheered on by their fans.

"There is no question that the campaign initiated by the 47, which united all sections of the working class, was a factor which gave leverage to the campaign against racism. The 1985 Liverpool v Everton cup final was an example, when most fans wore the blue and red stickers which declared: 'We support the Liverpool socialist council'!"

'What we saw' in the last Socialist (issue 919, page 4) was spot-on. The Guardian certainly is the house newsletter of the Labour right. It flags up all the injustices of capitalism only to attack the fight for an alternative when the time comes.

In the front line of the attack against Jeremy Corbyn - and therefore the fight against the very austerity she denounces on a weekly basis - is Polly Toynbee. In a recent column, "Why can't I get behind Corbyn, when we want the same things? Here's why", she attacks every move to resist the right wing. She is firmly on the side of 'Project Anaconda' and opposes transforming Labour into a party of the 99%.

Toynbee also refers to the false claim that Stella Creasy was attacked by a peaceful anti-war demo against the bombing of Syria outside her empty constituency office: "If he meant peace and unity, he could stop dead all talk of deselecting MPs, and protect MPs such as Walthamstow's Stella Creasy and Brighton's Peter Kyle, threatened by bullies acting in his name."

But this wasn't enough for the Guardian. A hyperlink takes you to an article which says of the vile abuse that Creasy has faced: "The Walthamstow MP Stella Creasy has had to put up with years of abuse: in 2014 a man was jailed for 18 weeks for bombarding her with messages threatening to rape her."

The Socialist Party condemns these and all such threats to women politicians. But we also condemn the Guardian for linking Jeremy Corbyn with attacks that took place at least a year before his first election.

This is just an indication of the lengths to which the representatives of big business in the Parliamentary Labour Party and the establishment press will go to maintain Labour as a party of the 1%.