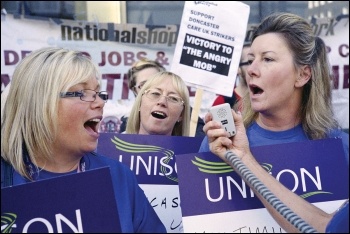 Record numbers of children are ringing helpline Childline with suicidal thoughts. And the Guardian reports that the number of children attending A&E with psychiatric conditions was up 8% - to 18,673 - in 2014-15.

One in ten children suffer from a diagnosable mental health disorder. One in every 12 inflict harm on themselves by cutting or burning their skin, punching or hitting themselves, poisoning themselves, deliberately starving themselves, or abusing drugs and alcohol.

The number of young people being admitted for harming themselves has risen in the last five years, according to charity Young Minds.

The Mental Health Foundation charity says some of the key risk factors associated with the development of mental health problems in children are living in poverty and growing up in care. With the increase in benefit cutbacks, and the rise in homelessness, the number of children requiring mental health care will only increase further.

The new Children and Social Work Bill (see story right) will only make this worse. It gives councils the choice of opting out of legislation designed to protect children in care. These children will be more vulnerable than ever to physical, sexual and emotional abuse, and material deprivation.

NHS data covering just three in every five mental health trusts shows 235,000 children are receiving mental health care in England alone. But there will be many more children who suffer mental and emotional disturbances and cannot access any services unless and until they get a clear diagnosis.

Bosses are cutting child and adolescent mental health services (Camhs) in the face of escalating need. A Young Minds investigation last year found more than half the councils in England had cut or frozen Camhs budgets between 2010-11 and 2014-15. And a recent poll by the Royal College of Nursing found 70% of specialist nurses think Camhs provision is "inadequate".

Teachers are struggling to support troubled children. A primary head speaking to the Guardian said "the challenge for us is there's a very high threshold for children and families to access services. If we are concerned about a child's mental health we would make a referral straight to Camhs but we very often are told 'this does not reach the threshold'."

The ongoing policy of cuts to the NHS, public services and benefits is creating a toxic situation. It is hitting us all - but the youngest and most vulnerable the hardest.

All trade unionists must fight the so-called NHS Sustainability and Transformation Plan. This is a fancy term for even more drastic cutbacks to the health service.

The National Shop Stewards Network has produced a model motion calling on the leaderships of all health unions to draw up campaigns to fight Sustainability and Transformation Plans. This means action up to and including strike.

Coordinated strikes could push this vicious but weak government back - and if spread and escalated, even bring it down.

The government's Children and Social Work Bill is currently under discussion in the House of Lords. If passed, it will allow councils to opt out of many of the laws protecting vulnerable children and young people.

These laws have been adopted over the last eight years following horrific cases such as Victoria Climbié and Baby P. The power of 'choice' for local authorities would be at the command of the secretary of state for education, who could allow three-yearly trials of different approaches, leading to an experimental postcode lottery of child protection.

Also worrying is the potential opening of the back door for privatisation, for companies such as Richard Branson's Virgin Care. The current laws prohibit profit-making companies being involved in child protection.

Virgin Care has become one of the biggest private providers of community healthcare. This year alone it has won six multimillion-pound bids on providing NHS community services around the country.

In 2012, commissioners chose Virgin Care for a £130 million contract to provide core NHS and social care services in Devon. The plan was to take over, 'integrate' (cut), and exploit for profit various children's services.

But although they got health workers, Virgin Care was prevented from including social workers due to legislation now under threat from the Children and Social Work Bill.

With council budgets still under attack from this austerity government, the offer of private companies running these services will look very appealing to councillors unwilling to stand up to Tory cuts.

Children's services have already seen unprecedented cuts. Commissioning for public health, moved from NHS to council responsibility, has faced £200 million in budget cuts from central government. This year, routine nasal-spray flu immunisations for five and six-year-olds are being provided in schools by pharmacists working for tax-avoiding chemist Boots.

These cuts to social work and public health funding and regulation - by the unelected prime minister Theresa May - will leave children and young people at higher risk of abuse and neglect.

A coordinated campaign across the public sector, including joint industrial action and a socialist political voice for workers, really is needed. Only this can protect the most vulnerable in society, our future, and our children and young people.