Councils and unions must combat the cuts 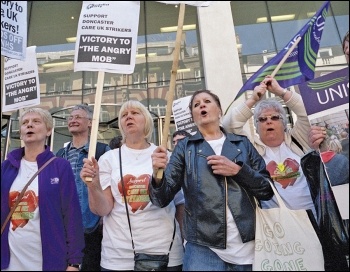 Home care providers are not renewing council contracts. The number of elderly people receiving social care from their local council declined by a staggering 26% between 2010 and 2015.

More than a million people who can't handle for themselves the basic necessities of daily life now get no help whatsoever. This is the reality of care under capitalism - in a rich country - in 2016.

A report by the King's Fund think-tank, 'Social care for older people: home truths', shockingly adds: "No one has a full picture of what has happened to older people... no longer entitled to publicly funded care."

Many care providers now concentrate on those forced to self-fund their own care - anyone above the threshold of £23,500 in total savings and assets. Over half of residential and nursing care funding now comes from private individuals rather than the state, which has reaped a lifetime of taxation from workers paying into a welfare system designed to protect them in old age.

There is a pressing need for a programme of action. This must start with those who have the power to change things - councillors and trade unions.

Continuing to implement cuts with the mantra "there's nothing we can do" is just condemning the elderly to penury. Labour councillors should be engaging with the care unions to mount an effective campaign to oppose cuts.

Unions must organise more vigorously in the voluntary and private care sectors. Unionise the workforce to fight these assaults. Join with local campaigning groups to fight cuts and, where possible, organise for united action across the movement.

For many, waiting for a 2020 election to act will sadly be too late.