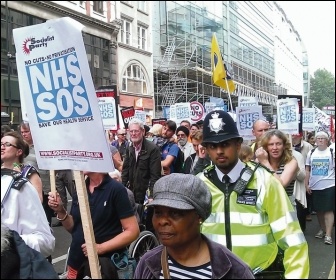 Huge cuts to hospitals and healthcare across Cheshire and Merseyside are in the pipeline, proposed in the very secretive 'Sustainability and Transformation Plan'.

This aims to deliver £999 million of 'savings' by 2021 - cuts of nearly £1 billion of jobs and services. It is part of a national plan by NHS England bosses and the Tory government to do the same to the NHS in every part of England.

The Socialist Party is totally opposed to these devastating cuts and our branches across the area are working with other campaigners to develop a movement of mass opposition.

The cuts mean hospital closures such as Liverpool Women's Hospital and plans to replace Arrowe Park, Clatterbridge and Countess of Chester with one hospital in Ellesmere Port. Other hospitals will also be threatened.

Whole departments such as A&E or maternity and neonatal will be closed at some hospitals and support services will be removed - pharmacy, labs (pathology) and scans (radiology) will no longer be provided at every hospital.

Other services and departments will be handed over to private companies and conditions for staff will get worse.

And finally the plans admit that some parts of the plan will save little or nothing, or don't know how much they will save and that even big closures may save little money as people will have to travel further to another hospital in the same region. This will mean more cuts at a later stage.

The plans refer repeatedly to opposition from the public and politicians threatening the cuts from going ahead. Every MP and councillor should be mobilising massive opposition to these cuts. But we will help mobilise a mass movement without waiting for them!

West Cheshire Socialist Party: Prepare for the next steps towards JC4PM