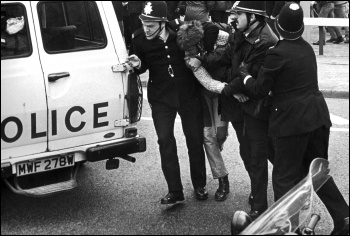 Rudd - clearly seeking to protect from exposure the political establishment's role in conspiring to break the miners' strike (1984-85) - justified blocking an inquiry on the grounds that "ultimately there were no deaths or wrongful convictions".

The fact that there were no deaths given the repeated baton charges by mounted police was purely fortuitous. Nonetheless, hundreds of miners were seriously injured on that day. That alone should merit an inquiry.

Moreover, there were no "wrongful convictions" only because 95 miners facing charges of unlawful assembly had their cases dropped after six weeks on trial because police evidence was deemed 'unreliable'.

Last year - despite evidence of assaulting striking miners and subsequently perverting the course of justice and committing perjury - the so-called Independent Police Complaints Commission (IPCC) said it would not pursue a criminal investigation into the actions of South Yorkshire police on that day "because of the passage of time".

The Orgreave Truth and Justice Campaign has long campaigned for a full and independent public inquiry into the 'Battle of Orgreave', which would include looking into whether the "actions of the police at Orgreave were influenced by political pressure from within the highest ranks of the government of the day."

The battle for truth and justice over the miners' strike will continue.