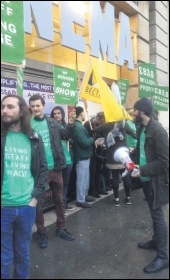 Strikers at Hackney Picturehouse picketed the launch of a new film on 4 November, A Bectu rep spoke to Clare Doyle: "This is the second time that Hackney Picturehouse workers have been on strike this month. We were planning to walk out at 4pm but they have been closed all day. We're striking for a living wage. We believe that the company can afford it and has a moral duty to pay it. They made a profit of £83.8 million last year! We're tactically targeting the busiest film launches. Tonight it's 'Nocturnal Animals'. It would've been a sold-out screening. We will also be targeting the launches of Harry Potter and Star Wars and all the other key moments in which they make all the money. We know this can cost them more than it would cost simply to pay us the living wage. We are willing to do this until we win!"