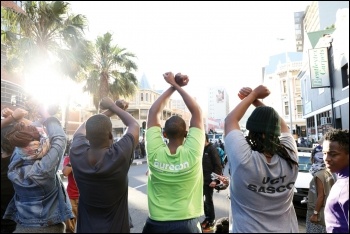 Austin Mofya, also an organiser for the Tshwane branch of the GIWUSA union, faces trumped-up charges of "public violence". These are old charges relating to Mofya's role in supporting a strike of outsourced workers at Tshwane University of Technology at the start of the year. The charges were dropped at the time, less than 24 hours after they were laid.

Mametlwe Sebei has been ordered to present himself to the Sunnyside police station. Sebei was the co-convenor of the student march to Union Buildings that took place on 20 October. The police declared the march illegal in advance but allowed it to proceed when students, workers and other supporters of free education assembled in numbers. The march was overwhelmingly peaceful, with the organisation of marshals to ensure discipline.

Austin and Sebei, alongside #OMF, Tshwane GIWUSA branch and WASP have played an important role in mobilising workers and working class communities in solidarity with the struggle for free education. This included uniting the strike of Sheraton Hotel workers for decent wages with the student march to Union Buildings. This is why they are now being targeted.

Workers will be mobilised to defend these activists. It is an attack on the whole movement.