Build housing for the 120,000 kids without homes this Christmas 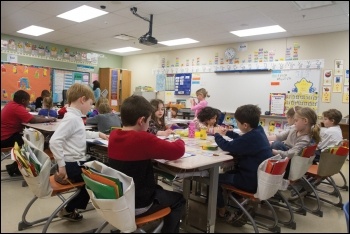 15% more children will be homeless this Christmas than last, photo by Eugene Kim (Creative Commons)   (Click to enlarge)

As this is also an increase of 15% since last year, it can be directly attributed to the constant barrage of cuts and sell-offs the government inflicts on working class people.

Horror stories of children disappearing overnight, or being forced onto the streets, are becoming the norm in most inner-city schools. Councils have a duty to find children that have nowhere to live somewhere to sleep. But this results in whole families living in one room, often miles away from relatives, friends and their community - the social networks that families need to rely on these situations.

A child in my class was told last November his family was likely to be made homeless, as they fell into arrears on their rent when dad lost his job. However, as they weren't to be evicted until February, they weren't allowed on the council emergency housing list until after Christmas, leaving four months of worry and stress.

After collecting evidence for court and many sleepless nights, they were finally in the 'lucky' position of being allowed to stay with increased rent and a payment plan for their arrears.

Temporary accommodation for two separate families is four miles or more away from the school. This creates a long, expensive commute every day for vulnerable children who don't know how long they will remain in the accommodation or in their school with their friends.

Establishment MPs put out statements about the 'true meaning of Christmas', or when decorations should appear in shops. It's hard to tell if they don't know about the thousands of families who are homeless and in substandard housing, or simply don't care. But one thing is for sure - it is up to us to change this system.

The resources already exist to do all this. The big home builders control space for 600,000 new homes! They have £1 billion waiting for the most 'profitable' time to invest. This can start to undo the situations which leads to these horror stories.

And those stories are just the ones who are counted as homeless. A family in the school where l teach has two children living with grandparents, while the other five siblings and mum share beds across a two-bed flat. They've been on the council waiting list for over two years.

Another child lives with their mum and sibling in the same community as their abusive dad. A restraining order doesn't mean much to a child. The constant fear that they may see their abuser, on their way to school or when they're out playing, does.

The Socialist Party fights for a society which cares about working class children and families, and provides plenty for all instead of enriching the parasitic super-wealthy.