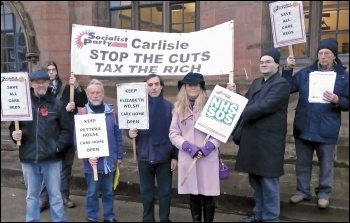 The protest was featured on ITV Border News and in the local newspaper the News & Star.

"With increasing demand, provision should be increased, not cut. This is especially serious now in Cumbria with the planned closure of cottage hospital beds and the worsening failure of the private sector to provide enough places with the required standard of care", said Carlisle Socialist Party secretary Brent Kennedy.

Campaigners also questioned the council's 'public consultation' exercise. "Family members have told us their relatives have recently been turned away from the existing care homes and members of staff have informed us that you are deliberately keeping the homes half empty in anticipation of their closure - in two years' time.

"If this is the case, it raises the question: what is the 'public consultation' for? Is this just a cynical pretence of democratic participation to provide a legal cover for a decision you have already made and are already implementing by stealth?"